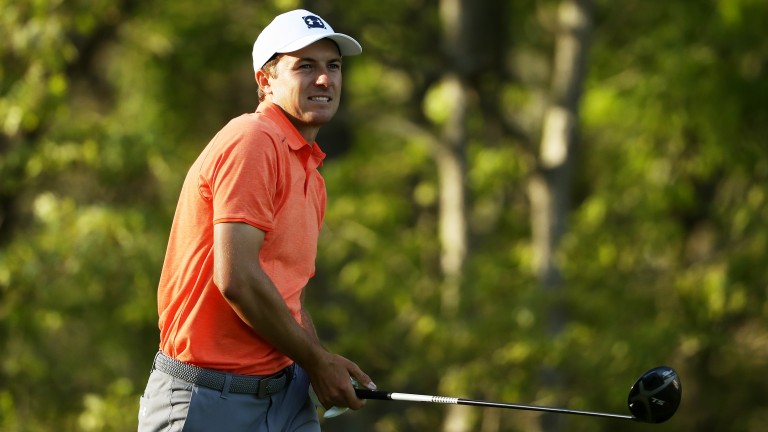 Jordan Spieth went from two shots behind to two shots ahead in the space of half-an-hour at the end of the Pebble Beach Pro-Am round three - the former golden boy of golf rediscovering some of the old magic which made him a three-time Major champion.

Spieth holed out from 113 yards for eagle at the tenth hole in round one, and he trumped that effort in round three, with a spectacular eagle two from 160 yards at the 16th. The drawn eight-iron approach, which pitched to the right of the flagstick before spinning straight left into the cup, suddenly sent Spieth to the top of the leaderboard.

Daniel Berger then made a mess of the 18th hole, leaving Spieth clear, chasing his first victory since the 2017 Open Championship. Spieth, 22-1 ante-post, was 5-2 favourite going into round three and has shortened further to 15-8 with 18 holes to play.

Patrick Cantlay has found Pebble Beach a doddle from tee to green this week. In round one, he putted well and carded a 62, while in round three he putted poorly and carded a 70. The flat-stick form of the world number 11 could be the key how Sunday develops.

Jordan Spieth is obviously playing under great pressure, seeking to end a long spell in the golfing wilderness. The shoots of recovery were seen in the Phoenix Open last week, but he followed a round-three 61 with a Sunday 72 to go from tied first to tied fourth. If Cantlay cranks up the pressure early, Spieth could easily buckle again.

Spieth is swinging better at Pebble than he did in Phoenix, where his challenge was built largely on round-three fireworks on the greens, and he has a better record at Pebble than Phoenix. This was likely to be a great opportunity for the former world number one to contend again, but the question marks were: Would his suspect driving cause too many problems? And can he stay composed enough down the stretch given the desperation for career-reviving silverware?

Cantlay could be crucial to both questions. If the highest-ranked player in the field hits his stride early and takes advantage of the easy front-nine at Pebble, Spieth will probably make the turn feeling tense and tight. But if Cantlay is slow out of the gates, Spieth may grow in confidence and swing more freely coming home.

There is a sense that Spieth feels he has the measure of Daniel Berger, who Spieth famously floored with an amazing bunker shot at the 2017 Travelers Championship, but a greater respect for Cantlay, who was such a dominant force in the junior and amateur game when they were youngsters, ranking as top amateur for 55 weeks.

Given the recent form of Cantlay, who closed his last event (The American Express) with rounds of 65 and 61 to finish runner-up, there is every reason to believe he will emerge as the main threat to Spieth on Pebble Sunday. Cantlay signed off with a 65 to win the Zozo Championship in California at the end of October.

The leaderboard is obviously congested and nobody should be ruled out, but pre-Sunday advice for outright punters is the same as the pre-Saturday one - concentrate on Spieth and Cantlay. Anyone with a large investment in one may want to consider some cover on the other, with odds of 2-1 (Coral, Ladbrokes) and 7-2 (general) perfectly fair.

Final-round threeball punters are pointed towards Cameron Davis, who has played superbly at Pebble Beach after struggling at Spyglass Hill on Thursday. Davis, eight under par for his 36 holes at Pebble, looks a solid favourite against Beau Hossler and Cameron Percy at 5.23pm UK and Ireland time.

The final threeball of Spieth, Nate Lashley and Tom Hoge are scheduled off at 6.40pm. A clear day with light to moderate breeze is forecast.