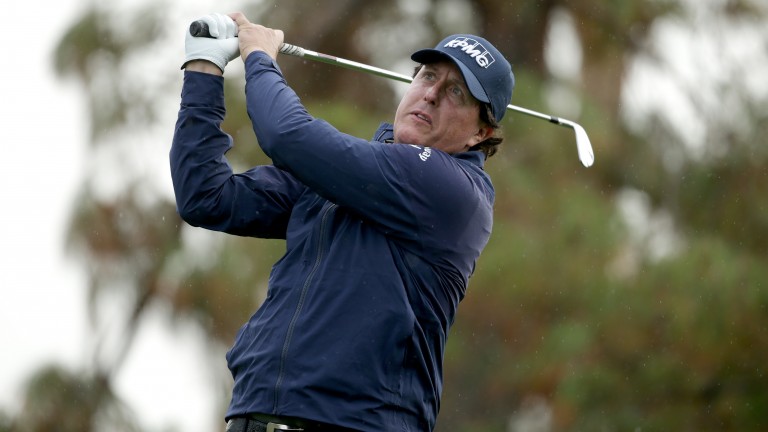 Mickelson is tied with Mark O'Meara on the mark of five victories at the iconic Pebble Beach, but Lefty is only one shot behind with 18 holes to play and looks capable of setting a new record.

All the Pro-Am competitors have played a round at each of the three courses used for this event – Pebble Beach, Spyglass Hill and Monterey Peninsula Country Club's Shore Course – and those who have made the cut will tee off at Pebble Beach for the denouement.

Pre-tournament 150-1 chance Nick Taylor leads the way, but Mickelson is alongside him in the final group and the five-time Major champion is a general 6-4 to triumph.

Phil Mickelson says he feels healthier than ever at the age of 49, having shed bundles of weight in fasting sessions, diet changes and fitness work, and the revived left-hander looks set to gain reward for his efforts with a sixth Pebble Beach success.

Outsider Nick Taylor has enjoyed himself in quiet groups over the first three days, but for round four he comes up against the crowd favourite, a Californian known in the Golden State as Phil The Thrill.

The galleries will be pulling for Mickelson and the legendary left-hander has shown in his last seven rounds of action that he is ready to serve up plenty of entertainment.

Mickelson could easily be going for back-to-back victories had he applied himself properly in Saudi Arabia last week. Despite some dubious course-management decisions, the Saudi debutant finished tied for third, using the Middle East venture to find his A-game.

At his Pebble playground, Mickelson has used the confidence gained from Saudi Arabia to make merry, and a final-hole birdie in round three has made him a strong favourite. Some of Lefty's short-game work this week has been jaw-droppingly impressive, so even if he finds any Sunday strife, he can be fancied to avoid card-busters.

The Sunday tee-times are early – Mickelson tees off at 9.50am local time (5.50pm UK and Ireland) – with some strong winds forecast for the afternoon. The man in second place, a former Open champion with enormous experience, can handle anything that comes his way.

The injury-plagued Jason Day, who is always more comfortable in conditions where he can send his ball gaily into orbit, is two shots behind Mickelson and difficult to fancy. Then there is a three-shot gap to those in fourth place.

Dustin Johnson, Matt Jones and Patrick Cantlay seem likely to make final-round charges and can threaten the places, but all have probably given too much of a start to Mickelson, who is relishing his return to Pebble Beach.