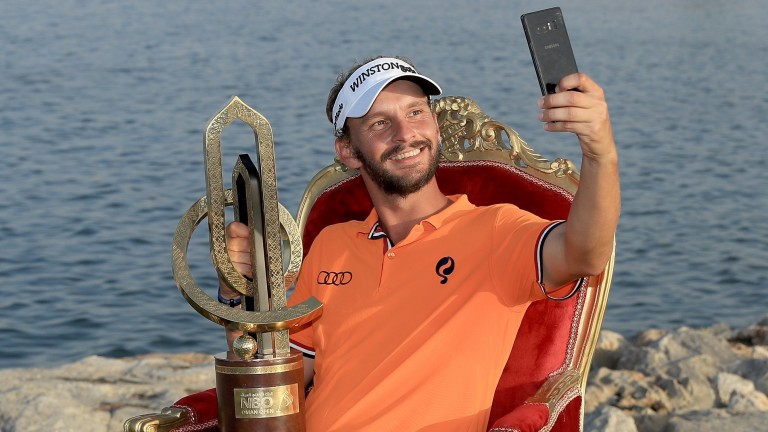 Joost Luiten pictures himself with the Oman Open trophy two years ago
Getty Images
1 of 1
By Steve Palmer 2:17PM, FEB 29 2020

Six players are tied for the lead going into the final round of the Oman Open, with former champion Joost Luiten headlining the group at 11 under par.

Luiten, a two-shot winner of the inaugural Oman Open in 2018, carded a bogey-free third-round 67 to join the head of affairs. The pre-tournament 22-1 chance has become 4-1 favourite with 18 holes to play at Al Mouj, Muscat.

Next in the betting is three-time European Tour champion Brandon Stone (11-2), then Mikko Korhonen (13-2) and teenage sensation Rasmus Hojgaard (8-1). Tour maidens Sami Valimaki and Callum Shinkwin complete the sextet sharing top spot on the board.

Guido Migliozzi is a shot behind, alone in seventh place, and the Italian is chasing a third Tour title at the age of 23. Thomas Pieters missed the cut by a shot, while Martin Kaymer has improved his score each day (73, 69, 67) to lie in 12th place, four behind, going into Sunday.

It is difficult to be bullish about anyone going into the final round of a wide-open Oman Open, but it is almost indisputable that Joost Luiten deserves favouritism.

Luiten is a course winner – he triumphed two years ago in similar conditions to what he has faced this week – and it is feasible that he may end up on the same 16-under-par total which won him the trophy in 2018.

Luiten is a six-times European Tour champion who was hitting his ball with great authority in round three, and if a few putts drop on Sunday, the Dutchman seems likely to have a winning opportunity going down the stretch at Al Mouj.

Luiten at 4-1 is a perfectly good wager for outright punters looking to get involved at this stage, but it is debatable whether 18-year-old boy wonder Rasmus Hojgaard should be double the price from the same position.

Hojgaard looks to have a wonderful future ahead of him, the Dane having already got off the mark on the European Tour with a gutsy playoff victory in the Mauritius Open at the start of December. The Q-School graduate turns 19 next month with his Tour playing rights assured and can approach the final round in Oman in relaxed and confident fashion.

Hojgaard, who looks about ten years older than he actually is and already possesses a giant frame which propels his ball huge distances, plays with the fearlessness of youth and does not carry any battle scars. A double-bogey seven at the seventh hole in round three would have knocked the stuffing out of many men, but this dude responded with three birdies in succession, then made two more to the hut to regain a share of first spot.

European golf is in great shape, with Viktor Hovland and Hojgaard emerging as potential Ryder Cup stars of the future, and Hojgaard can further showcase his talent in Oman on Sunday.

There is a strong chance the Oman champion will come from the penultimate group on the tee, rather than the final one, with Luiten, Hojgaard and Brandon Stone linking up a 7.14am (UK and Ireland time). Stone is also blessed with immense ability, but he squandered some winning chances at the end of last year with tame finishes.

The final group includes two Tour maidens, but Sami Valimaki and Callum Shinkwin are both too good to rule out, while Mikko Korhonen is a two-time champion and Guido Migliozzi is definitely worth considering from only one behind. The Italian has reverted to a conventional putting stroke, abandoning experimentation and looking much more dangerous.

A sunny day, with light to moderate breezes is forecast, adding to the wide-open nature of proceedings. Hojgaard is nominated as the best value option, with Luiten, Stone, Migliozzi, Valimaki, Korhonen and Shinkwin chasing him home.