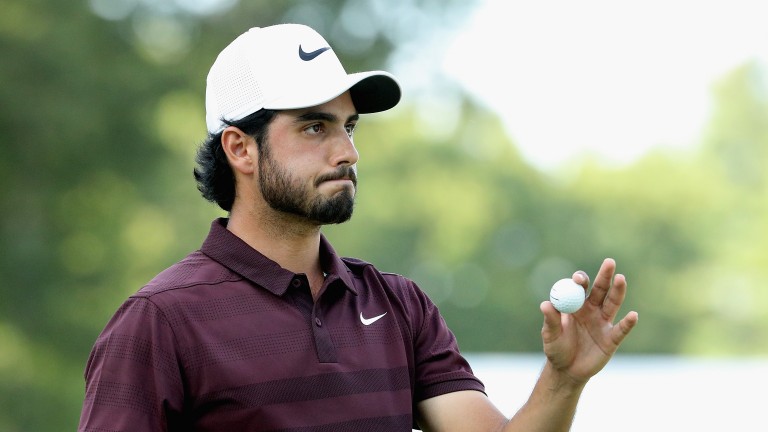 Golf tips, best bets and player analysis for the Mayakoba Classic at El Camaleon on the PGA Tour

Day, the only Major champion in the top ten of the betting, won the Japan Skins prior to taking 22nd spot in the Zozo Championship and will have his supporters. Hovland played well for Norway in the 2016 Eisenhower Trophy, which featured two rounds at El Camaleon, and missed the cut by just one shot as an amateur in last year's Mayakoba.

The hugely promising Hovland must be respected this week, while Kuchar, who controversially underpaid his local caddie last year, is well suited to the layout and should make a stout defence of his title if he is able to focus fully amid the negative spotlight on him.

While Kuchar is Public Enemy Number One at El Camaleon after his miserly antics last year, Abraham Ancer is the local hero, and Mexico's finest player can feed off the crowd support by landing a maiden PGA Tour title.

Ancer has established himself on the fringes of golf's elite, having moved up to 36th in the world rankings, and he is at a stage of his career where he can relish the extra attention and fervour of a home event.

Previously, as seen in the Mayakoba last year when he opened with a 65 before ending up in 21st place, the occasion has proved too much. Since then, though, he has won the Australian Open by a five-shot margin, duelled with Patrick Reed down the stretch of a FedEx Cup playoff event and finished fourth in a WGC tournament.

That WGC was the HSBC in China – his last outing – and a pair of weekend 67s showed his A-game has returned in time for him to be a leading player for the Internationals in the Presidents Cup next month.

With a Royal Melbourne clash against the USA on the horizon, the Mayakoba Classic will feel like a walk in the park for Ancer, and punters should expect a relaxed, positive performance from an accurate sort with an ideal game for El Camaleon. He finished ninth there in 2017 when ranked 287th in the world.

The 2013 Mayakoba champion has started the new season with form figures of 3-6-33-4, hitting his ball with great authority from tee to green, so it was a surprise to see such juicy prices alongside the name of Harris English this week.

English has failed to make an impact at El Camaleon since his victory there, but he had been in a three-year slump before linking up with new coach Justin Parsons in April. The pair have managed to solidify English's long game, with the fruits of their labour on display over the last two months.

English has always been a strong putter, but it is his tee-to-green work which has been yielding the excellent recent results. Before long, the old flat-stick magic should return, and he could secure a third PGA Tour title.

Aaron Wise signalled a return to form with third place in the Bermuda Championship last time out and punters would be wise to take the hint. The Bermuda venue is a par-71 course of similar length to El Camaleon and providing similar challenges – and there is growing evidence to infer that Wise can handle any assignment with which he is presented.

Wise contended in the US Open at Pebble Beach in June before a third-round 79 and a series of solid 2019 Major performances suggest the 23-year-old who won the 2018 Byron Nelson will enjoy a glorious career. Tenth place in the Mayakoba last year, which included a Saturday 63, indicates this trophy will be on his mantelpiece at some stage.

Russell Knox, a two-time PGA Tour champion who lost a Mayakoba playoff in 2015, is extremely well suited to the course and can boast finishes of 2-3-9 from his last three visits. Four rounds in the 60s for 11th spot in Bermuda last time out makes Knox a must for the staking plan, while the best outsider is Kramer Hickok, who won his PGA Tour card back with gutsy results of 19-5-3 in the Korn Ferry Tour Finals.

Hickok, like Knox, carded four rounds in the 60s in Bermuda, sharing 15th place, and the accurate Texan can improve on the 29th place he managed on his Mayakoba debut as a Tour rookie last year. He has won twice on the Canadian Tour, once on the Korn Ferry and recent short-game improvements hint that a PGA Tour breakthrough is feasible in Mexico.

Billy Horschel
The proud American has not entirely given up on representing his country for the first time in the Presidents Cup – Brooks Koepka's knee injury may mean another call-up is required – and a Mayakoba victory would get the attention of Captain Woods. Horschel is well suited to the course and in solid form.

Emiliano Grillo
The Argentinian, like Horschel, can be expected to churn out greens in regulation at El Camaleon but, again like Horschel, his strong long-game work is often undone by poor putting. Grillo can boast rock-solid Mayakoba form of 10-9-15.

Chez Reavie
The accurate Kansas man finished 14th on the Presidents Cup standings, a place behind Tiger Woods, who has selected himself as a wild card. Reavie is well suited to El Camaleon and will be looking to show Woods what he is missing.

Joaquin Niemann
The Chilean youngster is bursting with confidence after his six-shot Greenbrier breakthrough in September and looking forward to competing in the Presidents Cup. He could freewheel into contention in Mexico.

Tony Finau
The American Presidents Cup wild-card pick has just had a poor Asian Swing (59-53) and will be keen to justify the faith of Woods with a solid Mayakoba performance.

Kevin Kisner
The accurate Carolinian, a three-time PGA Tour champion who won the WGC-Match Play in March, has the tools to tame El Camaleon if he can shrug off a disappointing Asian Swing which ended with a Sunday 77 in the HSBC.

When to bet By noon Thursday

When to watch Live on Sky Sports Golf from 6pm Thursday

Time difference Mexico is five hours behind the UK and Ireland

Course overview The Mayakoba US Tour gathering takes place on the stunning Greg Norman-designed El Camaleon. This tournament, which started in 2007, was previously staged in February, running alongside the Accenture Match Play, until getting its own autumn date in 2013. One minute on this layout, the competitors are working their way through holes deep in tropical jungle and the next they emerge to oceanside holes where bare-chested spectators watch the action from the beach. El Camaleon is a quirky, fiddly track with limestone canals bisecting certain holes and there is even a cave which splits the first fairway into two sections. Sound course management is required, although scores in the low 60s have been recorded regularly by players with fairway-finding ability.

The story of last year Matt Kuchar beat Danny Lee by a shot, the American employing a local caddie whom he initially paid only $5,000 of his $1.3m winner's cheque

Weather forecast Humid and unsettled for the first two days, with hardly any wind, before a sunnier weekend with slightly stronger breezes

Type of player suited to the challenge The Mayakoba honours board is filled with accurate drivers and it appears the only way to compete is from the fairway. With peculiar troublespots waiting to punish the errant, precision operators Fred Funk, Brian Gay, Mark Wilson, John Huh, Graeme McDowell, Pat Perez and Matt Kuchar have relished the challenge

FIRST PUBLISHED 4:58PM, NOV 12 2019
He is at a stage of his career where he can relish the extra attention and fervour of a home event