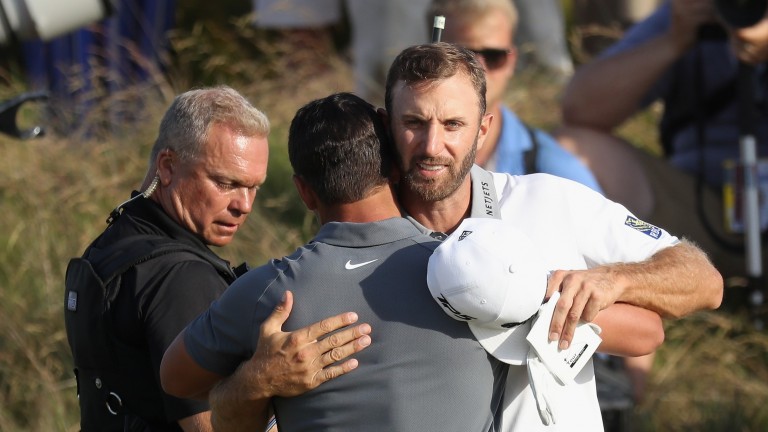 Dustin Johnson took control of the Masters on the third day at Augusta, the world number one moving from a share of the halfway lead to a four-shot advantage, courtesy of a bogey-free 65.

Johnson went four under par through four holes of round three, making a spectacular eagle at the second, then plotted his way sensibly around the layout from there to post a magnificent 16-under-par 54-hole total.

The pre-tournament 9-1 second-favourite, who finished tied second in the Houston Open last Sunday in his first event since a positive Covid-19 test a month ago, is no bigger than 4-11 to claim the Green Jacket.

This would be Johnson's second Major title - the first being the 2016 US Open - and it would make his Masters form figures from his last five Augusta starts 6-4-10-2-1. He missed the event in 2017 after falling down some stairs on tournament-eve and having to withdraw.

Masters bigwigs are keen on an early finish this year to avoid television clashes with other American sports, so the players are out in threeballs again and the final group of Johnson, Sungjae Im and Abraham Ancer is scheduled on the tee at 2.29pm UK and Ireland time.

Sky Sports presenters are desperately trying to keep their viewers interested in the Augusta proceedings with tales of the 1996 Masters and the 2010 US Open, but everyone is clutching at straws when it comes to reasons why Dustin Johnson will fail to convert this gilt-edged chance.

Norman wept on the shoulder of Faldo after his 1996 collapse, highlighting the emotional wreckage that the Australian became. If the same thing happened to Johnson today, he would probably shrug his shoulders and be happily sipping a cocktail in a nearby bar half-hour later. The shoulder of Sungjae Im would not be Johnson's destination of choice - it is so difficult to imagine the chilled Carolinian getting frazzled in anything close to the same manner.

The 2010 US Open was obviously a decade ago and Johnson had won only three PGA Tour titles before that Sunday 82 at Pebble Beach. He has 23 PGA Tour victories to his name going into Masters Sunday and has got into a winning habit in the second half of this year, defending leads with comfort on his way to success in the Travelers Championship, Northern Trust and Tour Championship.

Perhaps the event which the Sky commentators should be spending most time on is the 2017 WGC-HSBC Champions. That week in China, Johnson had produced a similarly dominant display over the first three days to that which he has delivered this week, building a six-shot lead for Sunday. It looked like Johnson was going to become the first player to win three WGCs in one year, but a shocking birdie-free 77 followed and Justin Rose ended up winning by two shots.

The ghost of Shanghai is something to which the Masters chasing pack can cling - and Johnson's pursuers have just got to pray he treads water in front. There must be a chance that the 36-year-old, who has become a much more sensible operator than ever before over the last few seasons, plays too conservatively in round four and invites pressure from behind. The modern DJ is happy to play away from pins and 'percentage golf', but the Sunday set-up for Augusta is typically made for birdies, so if the leader gets too cautious he could get in trouble.

With all due respect to the Majorless quartet between them, Justin Thomas still seems the most likely candidate to catch Johnson. Thomas is an explosive talent who has conjured some of the most incredible rounds in the history of golf - and he often produces remarkable bursts of scoring.

Thomas missed so many makeable putts in round three, leaving himself a six-shot Sunday deficit. There have also been too many loose shots - like the wild approach to the 15th in round three which bounded into the water behind the green - but the 2017 US PGA champion is the sort of player who could suddenly fire a 64 to give Johnson something to think about.

Racing Post Sport followers are hoping for place money from Thomas and Rory McIlroy, who shares tenth spot going in round four, and that duo can be expected to finish strongly. Jon Rahm may also have a finishing kick in him in the scramble for places behind Johnson, but they all need early encouragement from the leader if the ultimate prize of the Jacket is going to come back into question.

A Johnson bogey at the first and a par at the second, and Nick Dougherty, Paul McGinley and Co might have something to lure viewers back, especially with a little breeze forecast for when the leaders make the turn. Anything like the start Johnson made to round three, though, and international football friendlies may become more riveting for casual sports fans than a DJ procession at an almost silent Augusta.

Bubba Watson has been surprisingly uninspired this week - maybe the talk of a possible Masters hat-trick got to the mercurial left-hander - but the dual Augusta champion can be expected to outscore Shugo Imahira and Si Woo Kim in their 1.12pm (UK) Sunday meeting. Watson arrived at this event in great ball-striking form and he is massively proven on this layout.

Thomas is fancied in the 'without Dustin Johnson' market. Thomas is too professional to 'turn it in' and should be 100 percent focused to the finishing line, even when his winning chance has gone. He will want to further enhance progressive Masters form figures of 39-22-17-12 and lay down a marker for April's 2021 edition.