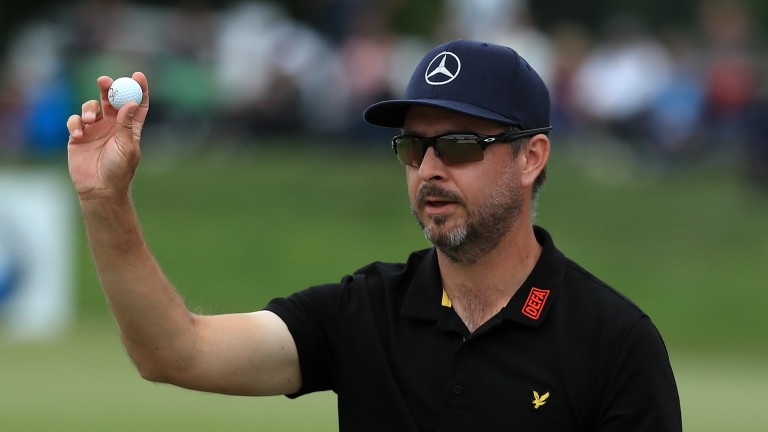 Mikko Korhonen is one shot behind in a tie for second place
Getty Images
1 of 1
By Steve Palmer UPDATED 9:27AM, AUG 2 2020

Sam Horsfield had the Hero Open under control, enjoying a five-shot lead early in the back-nine through the third round, but a double-bogey seven at the 12th hole, then bogeys at the 16th and 17th meant the Englishman will take only a one-shot advantage into Sunday at the Forest of Arden, Birmingham.

Horsfield, 45-1 at the start of the week and a pre-tournament 35-1 chance, is no bigger than 100-30 with 18 holes to play, having reached 14 under par through three rounds. The Manchester-born Florida-based 23-year-old was at 18 under par before his sloppy finish, but a one-under-par 71 was enough to take the lead into the denouement.

Rasmus Hojgaard, Oliver Farr and Mikko Korhonen are tied for second place, one shot behind. Hojgaard, winner of the Mauritius Open at the end of last year, was runner-up in the British Masters last Sunday.

Sam Horsfield had the Hero Open at his mercy through 47 holes of the tournament, but mistakes coming home have made the event wide open with a round to go.

Horsfield took the setbacks well and in his post-round interview spoke about how he would have been delighted with this position if offered it before the tournament, but the chasing pack have been given renewed optimism, and anyone from 11 under par upwards will feel well in the hunt.

Racing Post Sport followers are in good shape, with ante-post each-way investments on Horsfield at 35-1, Hojgaard at 28-1, Paisley at 80-1 and Detry at 20-1, but the congested nature of proceedings mean nothing can be taken for granted.

Mikko Korhonen, who turned 40 last month and is a two-time European Tour champion, seems the biggest fly in the ointment. The other members of the top six who are not carrying a Racing Post Sport ante-post recommendation have never won a Tour event.

The 5-1 Korhonen may appeal to punters who followed the pre-tournament staking plan and are looking to shore up their position, but he is the world number 173 and just as likely as those around him on the board to falter.

With Horsfield, Hojgaard, Paisley and Detry going into bat, this seems a moment to keep the faith and ignore the outright market. With four of the first six in the betting, the chances of some success are strong.

The super-talented Hojgaard, the headline selection ante-post, carded his second bogey-free round of the week in round three, and the Danish teen would be the tip for punters keen to get involved at this stage. The 4-1 with Sky Bet is more than fair.