Andy Sullivan can repel the chasing pack for another frontrunning success 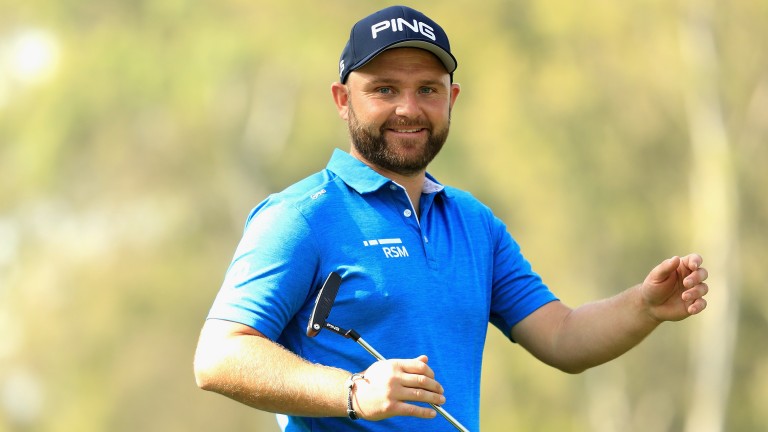 Andy Sullivan will take a two-shot lead into the final round of the inaugural Golf in Dubai Championship, the Midlander seeking a wire-to-wire success.

The four-time European Tour champion has led all the way at the Fire Course, Jumeirah Golf Estates, and is no bigger than 11-10 going into Saturday's denouement.

Sullivan won the English Championship by seven shots in August, so has recent experience of successful frontrunning. Matt Wallace, who blew a three-shot final-round lead in the Scottish Championship in the middle of October, is alone in second place.

Robert MacIntyre went seven under par through his first seven holes of round three, but was over par from there and will start the final round five shots behind.

Andy Sullivan showed great comfort frontrunning in the English Championship at Hanbury Manor in the summer, starting round four five shots ahead, then extending his advantage to seven through the final 18 holes, and his backers have every right to be hopeful of success.

Matt Wallace had the chance to apply some extra pressure to Sullivan with a short birdie putt on the 18th hole of round three, but an ugly pull meant a par and that missed tiddler will surely haunt the Londoner. Wallace is winless in the last 27 months and he made a nervous start to round four when leading the Scottish Championship in October.

Adrian Otaegui played superbly on the Sunday of the Scottish Championship and triumphed, but Wallace welcomed the Spaniard and the rest of his pursuers by covering the opening ten holes in one over par. A commanding three-shot advantage over a poor field became a meek four-shot defeat.

Sullivan seems likely to repel Wallace, while Ross Fisher, without a trophy since the 2014 Tshwane Open, has an even larger drought to end. Fisher typically falls short on the greens and it would be a surprise if he converted enough opportunities with flat-stick in hand to overcome a three-shot final-round deficit.

Racing Post Sport followers are on Sullivan pre-tournament at 25-1 - part of a two-pronged attack after Tom Lewis withdrew prior to the event starting - and 90-1 chance Thorbjorn Olesen is still close enough to threaten some place money.

Punters working from that position may choose to have some cover on Renato Paratore at 10-1, as the Dubai-based Italian may turn out to be the main dangerman to the leader. Paratore, allied to that local knowledge, can draw upon post-lockdown success, having won the British Masters by three shots in July. From three shots behind Sullivan, the 23-year-old Roman could go close to a third European Tour title should the leader provide any encouragement.

The final threeball of Sullivan, Wallace and Paratore is due out at 5.55am UK and Ireland time. A sunny, calm day is forecast.

With Marc Warren seemingly carrying an injury - the Scot wincing in pain after some swings in round three - the 5.15am threeball is the most interesting from a betting point of view. In-form American Sean Crocker, who came close to victory in the Alfred Dunhill Championship last week before a final-hole scorecard-wrecker, seems the value option to beat Warren and Joakim Lagergren.