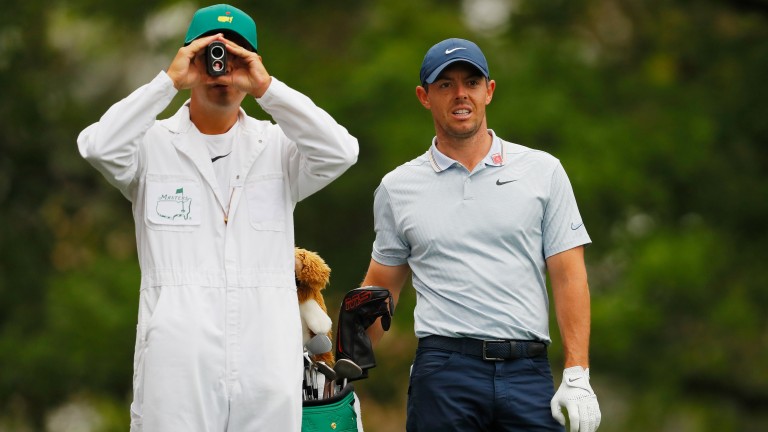 Rory McIlroy and his caddie Harry Diamond are thriving alongside each other
Getty Images
1 of 1
By Steve Palmer UPDATED 2:16PM, NOV 16 2021

Golf tips, best bets and player analysis for the DP World Tour Championship at the Earth Course on the European Tour.

Live on Sky Sports Golf from 6am on Thursday

There has been a long love affair between the Earth Course and Rory McIlroy, which started in the first of the European Tour finales there in 2009, and the Northern Irishman seems ready to complete a hat-trick of victories on Sunday.

McIlroy produced a mature performance to win the CJ Cup last time out - his course-management was excellent down the stretch - and the 32-year-old seems more at ease than ever between the ears. A brief dalliance with Pete Cowen as coach is over - he is back with his tutor from childhood Michael Bannon - and there is an acceptance that the McIlroy who won four Majors is still there. Rory has stopped chasing technical improvements - he knows how good he is and intends to relax and play more on instinct.

Caddie Harry Diamond has had a great year - instrumental in the Quail Hollow victory and sharp during the CJ Cup - so the McIlroy camp seems settled. His sole focus this week is winning the DP World Tour Championship - he is out of the RTD running - and a freewheeling McIlroy should be the man to beat.

The scent of the world-number-one ranking is back in McIlroy's nostrils - that is the position where he feels he belongs - and Earth Course glory will go a long way to moving him closer to top spot.

One of McIlroy's partners from the 2016 Ryder Cup could prove his biggest threat in Dubai. Thomas Pieters, who top scored at Hazeltine on his Cup debut, got back to winning ways in the Portugal Masters last time out.

Pieters, a five-time European Tour champion at the age of 29, skipped the Dubai Championship to freshen up for the DP World - and the Belgian must have an excellent chance of making a serious impression.

Pieters finished sixth at the Earth Course in 2019 - like McIlroy, he posseses the power and long-game class to cut the enormous layout down to size - and Pieters has a strong record in the desert. He followed three top-fives in the Abu Dhabi Championship with third spot in last year's Saudi International.

Two-time European Tour champion Dean Burmester contended through two rounds of the Dubai Championship last week, which was a decent warm-up for the Earth Course on the neighbouring Fire Course, and the South African could produce a four-round performance this week.

Burmester, who won a Sunshine Tour event just before jetting to the Dubai Championship, may have suffered some mental fatigue over the weekend. The lack of travel between the two Dubai events, though, means he has freshened up for the finale. With Earth Course form of 4-4-14, this slugger must be respected.

Complete a four-pronged attack of big-hitters with Adri Arnaus. With only 53 players in the field - and as many as eight each-way places up for grabs - this is an excellent tournament for each-way punters. Arnaus, a playoff loser in the Spanish Open last month and eighth in the Portugal Masters last time out, lives in Dubai and practises regularly at the Earth Course.

Two DP World starts have yielded finishes of 28th and tenth for Arnaus. The swashbuckling maiden is performing well enough to continue that upwards form curve this week.

Lucas Herbert
The Bermuda Championship winner, a cardholder on both sides of the Atlantic, made his European Tour breakthrough in last year's Dubai Desert Classic. Dangerous.

Nicolai Hojgaard
The Danish youngster, second in Portugal last time out, has all the tools to tame the Earth Course, but may need time to settle on his tournament debut.

Min Woo Lee
The 23-year-old Aussie, who finished fourth in the Dubai Championship on Sunday, complained of fatigue during the event. He is making his Earth Course debut.

Guido Migliozzi
The Italian finished 16th in his only previous Earth Course start. Hopping between the European and PGA Tour lately has resulted in poor form on both.

Course overview The Greg Norman-designed Earth Course was specifically built to be the venue for the European Tour's season finale. The Volvo Masters at Valderrama traditionally signalled the end of the European Tour campaign, but in 2009 the Race to Dubai started and the Jumeirah Golf Estates became home for the curtain-closer.

The fairways are wide and there is little in the way of tree trouble. The 186-yard par-three sixth hole over water has the scope for disasters, while the 499-yard par-four ninth hole is another significant challenge on the front nine.

The 195-yard par-three 17th has an island green, while the 620-yard par-five 18th has a stream which splits the fairway in two, so much late drama can occur. The greens are large, undulating and quick, with plenty of run-off areas. The winning score has been between 14 and 25 under par in all 12 previous editions.

Story of last year Matt Fitzpatrick ended a 27-month victory drought by edging out compatriot Lee Westwood by a shot.

Weather forecast Hot and sunny, with calm mornings replaced by breezy afternoons. Sunday looks set to be the calmest day.

Type of player suited to the challenge This long layout with wide fairways typically plays into the hands of the big-hitters and Matt Fitzpatrick is the only short driver to have won there.