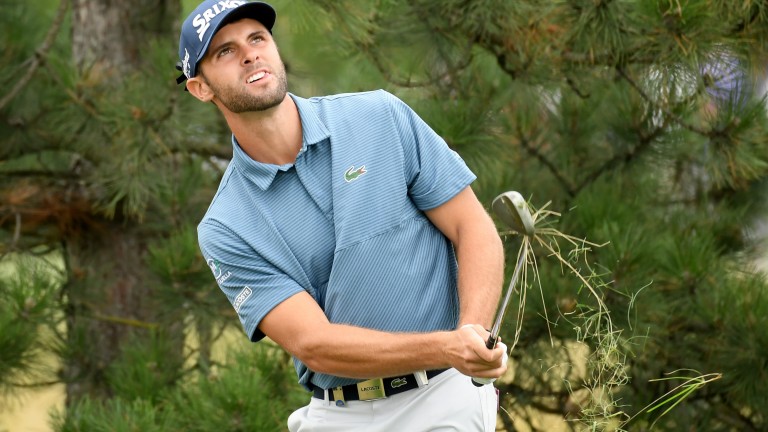 Adri Arnaus looks the pick of the threeball options
Ross Kinnaird
1 of 1
By Steve Palmer 7:12PM, MAY 8 2021

Garrick Higgo is a general 8-13 to win his second event on the 2021 Canary Islands Swing of the European Tour. The South African left-hander, who won the Gran Canaria Lopesan Open the week before last, is two shots clear with 18 holes to play in the Canary Islands Championship.

Higgo, 12-1 favourite ante-post, won in Gran Canaria with a 25-under-par total - and he is 20 under par going into the final round at Golf Costa Adeje, Tenerife, on Sunday. The rampant 21-year-old closed his third round with four consecutive birdies to stamp his authority on proceedings.

Tour maidens, Richard Mansell and Calum Hill, are second and third on the leaderboard, and the only European Tour champion within six shots of the leader is Andrew Johnston, who is tied for fourth place, five behind.

Punters who have followed Garrick Higgo through the Canary Islands Swing are enjoying themselves no end. He was the 40-1 winner of the Gran Canaria Lopesan Open, then tied eighth in the Tenerife Open at 18-1.

This week, he was 12-1 market leader for the Canary Islands Championship, and favourite backers are sitting pretty.

It was not as if the classy youngster did not provide any warning for this burst of Canary Islands birdies. He won the Open de Portugal last year on another course overlooking the Atlantic Ocean. And the week prior to jetting to the Canaries, he finished fourth in the Austrian Open, improving his score in each round.

Dean Burmester was surrounded by Tour maidens going into the final round of the Tenerife Open last week and went on to a cosy five-shot success. A week later, his compatriot Higgo may enjoy a similarly easy ride and complete a South African Canaries clean sweep of titles.

The main danger to Higgo backers is arguably Calum Hill, who has won three times on the Challenge Tour and clearly looks good enough to become a main-tour champion. From three shots behind, the Scot can take advantage of any faltering from the frontrunner.

Hopefully Robin Sciot-Siegrist, a Racing Post Sport ante-post recommendation at 175-1, can secure some place money from a share of seventh place.

Nicolai Hojgaard, tied with Sciot-Siegrist, is another dangerous runner lurking just off the pace, but Hill seems the most sensible investment in the without Higgo market.

Final-round threeball punters are pointed towards Adri Arnaus, who recovered well from the horror of a nine at the third hole in round three, playing the remainder of his round in two under. The Spaniard can be fancied to outgun Francesco Laporta and Eduard Rousard in the 10.10am (UK and Ireland time) group.

The final threeball of Higgo, Hill and Richard Mansell is scheduled off at 11am.