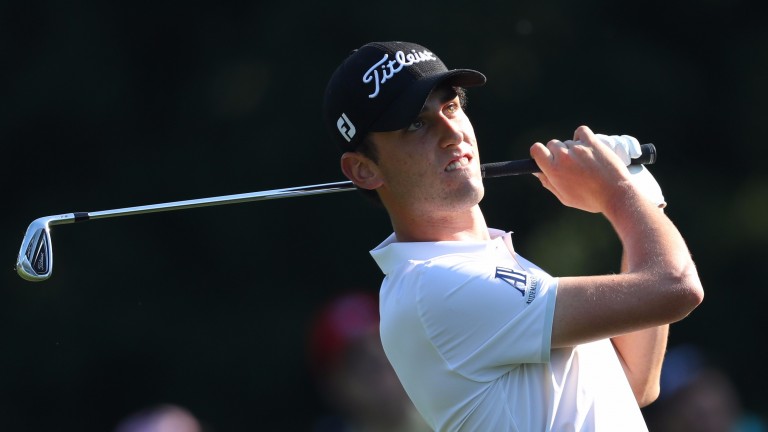 Renato Paratore is atop the leaderboard in Newcastle-upon-Tyne
Getty Images
1 of 1
By Steve Palmer 6:43PM, JUL 23 2020

Renato Paratore, a pre-tournament 50-1 chance, leads the Betfred British Masters at the halfway stage – the Italian carding rounds of 65 and 66 to reach 11 under par through 36 holes.

The market principals have struggled at Close House, leaving the event with a wide-open look, and Paratore is 4-1 market leader.

Ante-post favourite, Lee Westwood, made the cut on the mark and has a ten-shot deficit to overcome over the final two days, while second-favourite, Thomas Detry, missed the cut by two shots.

Lee Westwood has left himself a mountain to climb over the final two rounds, Thomas Detry has already packed his bags, and Eddie Pepperell may not be putting well enough to have high hopes of claiming a second British Masters title from five shots off the lead.

Marcus Kinhult, Adrian Meronk and Matthew Jordan seem likely movers from deep on the board, but all have given a significant headstart to some quality operators and three names in the thick of things are arguably the trio that outright punters should be concentrating on.

Justin Harding, a seven-time champion on the Sunshine Tour, a two-time Asian Tour victor, and winner of the Qatar Masters on the European Tour last year, has become a prolific collector of silverware. From just one shot behind, the South African deserves great respect, while two-time Challenge Tour champ, Calum Hill, also looks extremely dangerous from two shots off the pace.

Preference though – as far as a wager for this stage of proceedings – is for Rasmus Hojgaard. The 19-year-old Dane has got a level of potential which dwarfs everyone else on the leaderboard. This lad could become a superstar, given his natural gifts and almost immediate European Tour success.

Hojgaard won the Mauritius Open at the end of last year – and Renato Paratore was one of his playoff victims – and victory No. 2 could be coming at Close House.

Hojgaard has dropped only one shot all week and the power-packed youngster looks primed for a fun Friday. He won the McGregor Trophy as an amateur in 2016 at Royal Ashdown Forest, East Sussex, and further joy could be coming in England on Saturday.

The technique of Paratore is far from textbook and could easily unravel under the pressure of the lead. Harding, Hojgaard and Hill may overtake the Italian in round three.