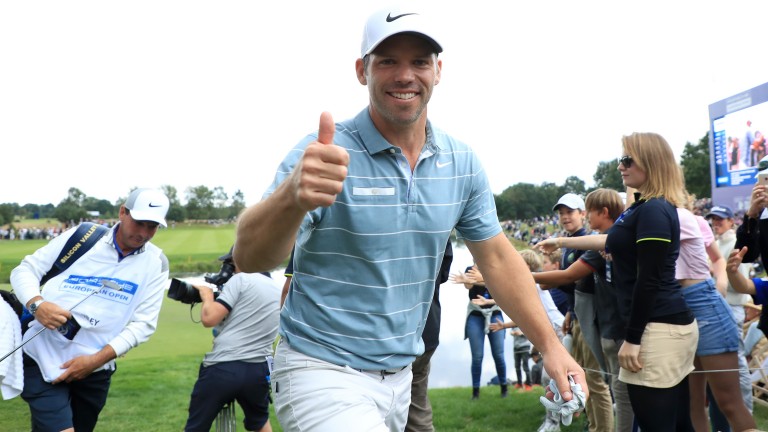 Paul Casey has been playing superbly this year
Matthew Lewis
1 of 1
By Steve Palmer UPDATED 9:28AM, MAR 6 2021

Corey Conners leads the Arnold Palmer Invitational going into the weekend, the Canadian moving to nine under par through 36 holes at Bay Hill, Florida.

Conners, available at 100-1 at the start of the week, has shortened to 13-2 through two rounds, but two players are ahead of him in the betting. Rory McIlroy, who teed off on Thursday a well-backed 8-1 favourite, has retained market leadership. McIlroy is a general 7-2 chance from a share of third place, two behind, while Viktor Hovland, 12-1 ante-post, is tied with McIlroy and available at 9-2.

The front three in the ante-post betting have all put themselves into contention, with Bryson DeChambeau, 12-1 on tournament-eve, alone in sixth place, three shots behind Conners. The leader won the Texas Open in 2019, but has failed to secure a second PGA Tour title.

Bryson DeChambeau's suggestion that he would drive the par-five sixth hole has so far proved nothing but bluster, but Arnold Palmer Invitational organisers could not have wished for a more enthralling leaderboard at the halfway stage of the Orlando gathering.

Almost all the biggest names in attendance have played well enough over the first two days to set up a winning chance for the weekend.

Corey Conners has every right to be looking over his shoulder and gasping for air, disappointed with the class of the chasing pack. This week's field is short of star quality, but most of the big names who entered, have shined - Viktor Hovland, Rory McIlroy, Bryson DeChambeau, Paul Casey, Justin Rose, Jordan Spieth, Lee Westwood, Matthew Fitzpatrick and Tommy Fleetwood are all on an attractive leaderboard.

Bookmakers will be hoping the front two - Conners and Martin Laird - can kick clear and save them a difficult week. But it seems much more likely that punters will win on Sunday, with so many well backed players in contention.

Racing Post Sport had three ante-post selections - Tyrrell Hatton left himself with a mountain to climb after a shocking first-round 77, and a Friday 67 still leaves him requiring serious weekend fireworks to be a factor, but Paul Casey and Christiaan Bezuidenhout have given themselves the opportunity of a title tilt.

Casey, Bezuidenhout and Sungjae Im are all on offer at generous odds going into the weekend and are worthy of consideration, but defeating Hovland could be an immense task. The ever improving Norwegian youngster expressed a dislike for Florida courses in his post-WGC interview on Sunday, but that did not stop him finishing second at The Concession last week and he could be set for something even better at Bay Hill.

Like them or not, Hovland has become so good that any golf course in the world is at his mercy, and the forecast for Saturday rain just adds to the feeling that vivacious Viktor is going to be tough to beat. A softening of the turf should help Hovland showcase his power-packed game and he could take a lead into Sunday.

McIlroy and DeChambeau will appreciate the potential change in conditions, too, so must be respected, but Hovland at 9-2 (general) and Casey at 20-1 (Coral, Ladbrokes) are the most appealing outright odds on offer at this stage.

Third-round twoball punters are pointed towards Byeong Hun An (5.05pm UK and Ireland time), a Florida-based Korean well suited to the Bay Hill assignment. An seems a good value outsider against Kevin Na.

Conners and Laird are scheduled off at 6.45pm UK and Ireland time.