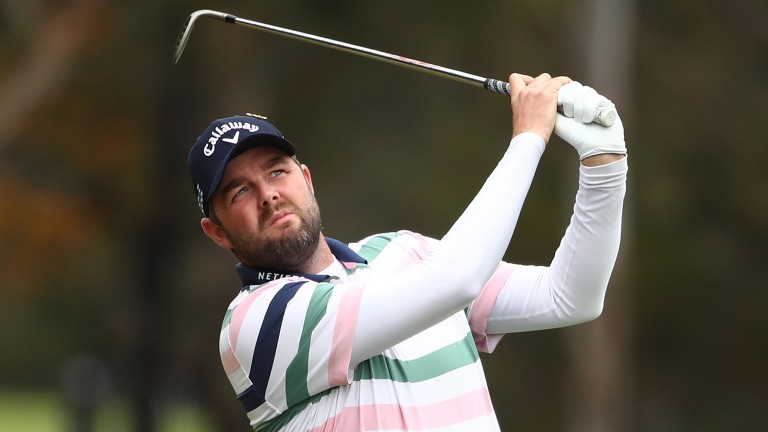 Tyrrell Hatton triumphantly raised a fist in the air after holing a long birdie putt at the 18th hole of the Arnold Palmer Invitational on Saturday – the Englishman securing a two-shot advantage for the final round.

Hatton admitted afterwards his premature and unusual reaction to the birdie was down to shock that the speeding ball was swallowed up by the cup, mixed with relief that it did not race past. The pre-tournament 50-1 chance shortened to 11-4 after the last-gasp boost.

Hatton, seeking his maiden PGA Tour title, has not done enough to secure favouritism, though, with Rory McIlroy remaining atop the betting. McIlroy found the rocks with his approach at the 18th hole, making bogey, but the four-times Major champion is tied for second, alongside Marc Leishman, and is no bigger than 2-1 for victory.

Leishman is a general 5-1, while last week's Honda Classic champion, Sungjae Im, is a 9-1 chance from three shots behind, and it is 16-1 bar that quartet.

Even Tyrrell Hatton, the most miserable golfer in the world, said he was “over the moon” about his birdie at the final hole of round three – and it has given the temperamental Buckinghamshire boy a good chance of a Stateside breakthrough.

Hatton has won four times on the European Tour – his last victory coming in Turkey in November despite the fact he was struggling with a wrist injury at the time – and he has played in a winning Ryder Cup team. He scored one point from three matches at Golf National, losing his singles to Patrick Reed.

The quartet of victories have come in good but not great fields – and winning the Arnold Palmer would be Hatton's career-high achievement by a considerable distance. Five of the top-ten players in the world were in the Bay Hill line-up.

The disappointment for Hatton is that the highest-ranked player of all is lurking just behind him. Rory McIlroy made a mess of the 18th hole in round three, but the Northern Irishman has been relentlessly consistent this season and will expect to overcome a two-shot deficit on his Ryder Cup colleague.

A cloudy, breezy final day is expected, and the suspicion is that Hatton is not solid enough from tee to green to repel the quality on his tail. He struck his ball well in round three – it was certainly not putting which sent him clear – but under extreme Sunday pressure some long-game mistakes seem more than likely.

McIlroy, on a streak of six consecutive top-fives, won the WGC-HSBC Champions in November and seems the most likely to take advantage of any Hatton howlers. A best-price 2-1 McIlroy is no more than fair, though, given he has let three winning chances slip this year, and the most appealing odds going into Sunday are the 5-1 Marc Leishman and the 9-1 Sungjae Im.

Leishman was the 2017 Arnold Palmer champion, winning in similar conditions to that he has faced this weekend, and the forecast for strong Sunday afternoon breezes plays into the hands of the Australian. The five-times PGA Tour victor, who won the Farmers Insurance Open with a Sunday charge at the end of January, should relish his place in the final twoball. Yet another Aussie 2020 winner could be coming.

Im holed from 36 feet on the 18th hole of PGA National to end round three on a high last week and set himself up well for Honda Classic Sunday, and he repeated the trick at Bay Hill with an even more spectacular effort – a Saturday sizzler from 55 feet. That kept the Korean well in the hunt for back-to-back victories and he could easily conjure a closing round similar to the one he delivered in the Honda last week. Im has been bursting with ball-striking quality and any warming of the putter should see him contend down the stretch.

Leishman is preferred to Hatton in the final twoball (5.40pm UK and Ireland time), while Harris English can prove too steady for Sung Kang in the 5.10pm match. Kang, who has a technique which makes purists wince on every shot, made two triple-bogeys on his back nine in round three and further scorecard damage seems likely for the Korean on a windy, watery layout.