Shrewsbury's slide down League Two could continue at Bradford 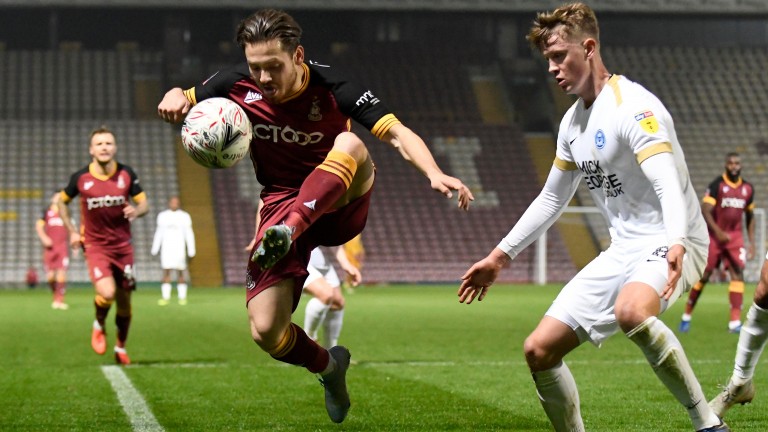 Jack Payne of Bradford jumps to control the ball against Peterborough
George Wood
1 of 1
By Steve Davies 8:00PM, JAN 28 2019

Shrewsbury won plaudits galore for their gallant FA Cup effort against Wolves on Saturday but it's points not praise they need and they’re going to find those hard to come by at Valley Parade.

The Shrews were minutes away from a place in round five but instead have to settle for a replay at Molineux next Tuesday, an extra fixture they could have done without.

While they've been going well in the cups they've been sliding alarmingly in Sky Bet League One where they have not won in five and not scored in three.

That makes them hard to like at Bradford, whose 1-1 draw at Burton on Saturday placated fans disappointed by heavy defeats against Barnsley and Southend.

The Bantams are still in the bottom four but improving markedly. They were unbeaten in seven at home prior to that reverse against Southend.

They are six places behind Shrewsbury but only three points inferior and can go level after this encounter.

Paul Tisdale's MK Dons are going through a bad patch and that's something Oldham can exploit in a Sky Bet League Two showdown.

Promotion outsiders, they've already won at Fulham in the FA Cup since the turn of the year and were desperately unlucky to lose 2-1 at Doncaster in the same competition on Saturday.

The Dons have lost three in a row and were clueless how to break down ten-man Grimsby at the weekend. They lost 1-0 and can expect to confront a similarly obdurate adversary in Oldham.

It's no great surprise that Blackpool do most of their best work away from a toxic atmosphere at Bloomfield Road.

There's precious little love for the Tangerines at the moment with fans at their wits' end over the running of their beloved club. Decent on their travels, away from the ire, conversely they haven't scored in four on home soil.

That has to offer some hope to visitors Wycombe, who sit just a place and a point behind the Lancastrian outfit in Sky Bet League One following three wins in a row.