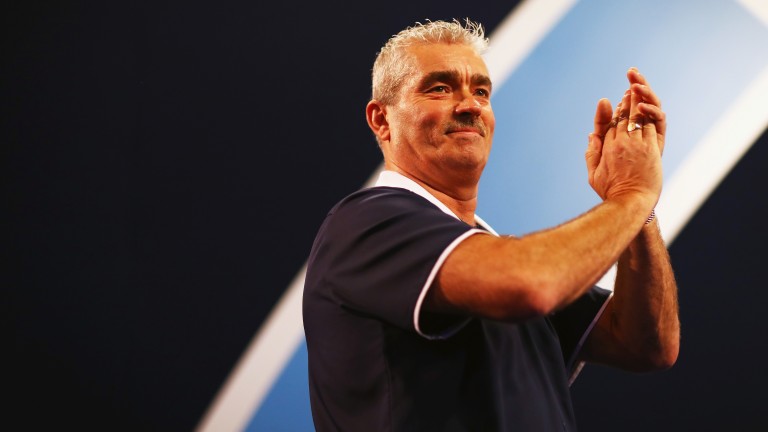 Evergreen Steve Beaton is enjoying himself at the Citywest
Naomi Baker
1 of 1
By Henry Hardwicke 8:00PM, OCT 2 2018

Steve Beaton produced a major shock when defeating Rob Cross in the first-round of the World Grand Prix on Monday night and the Adonis looks ready to strike again when he takes on Gerwen Price.

It was the second year running that Beaton has dumped out Voltage and there seems no reason to think the silky smooth thrower will not follow up that victory. The Adonis is a steady chucker and he is unlikely to be rattled by Price's aggression, which seemed to upset Danny Noppert, in the opening round.

The Iceman was pretty poor in that clash against Noppert, averaging just 79.15 and hitting six of 22 finishing doubles. Beaton is rated a 13-8 chance tonight and that price looks too generous.

Another outsider who could cause an upset is James Wilson. Lethal Biscuit has sometimes struggled to produce his best game in front of the big crowds on the TV stage. However, there was a lot to like about Wilson's 2-1 win over Simon Whitlock and they have hardly been packing in the fans at the Citywest, which doesn't tend to liven up until the weekend.

It's hard to knock Lewis's impressive 2-1 win over Michael Smith but he may be slightly overrated because of that and quotes of 7-4 about Jammy Dodger look tasty.

Jermaine Wattimena didn't give the solid Mervyn King a sniff in what was a pretty faultless first-round display, and the improving Dutchman can at least give Peter Wright a spin.

Coral and Ladbrokes make it an 8-13 chance that the match goes to four or more sets and that looks worth backing. Wattimena is growing in confidence as he finds his feet in major PDC events, and his rapid throwing style showed no signs of faltering against King. There's little reason to oppose Snakebite, but the price does seem to underrated his opponent.

FIRST PUBLISHED 8:00PM, OCT 2 2018
The Adonis is a steady chucker and he is unlikely to be rattled by Price's aggression