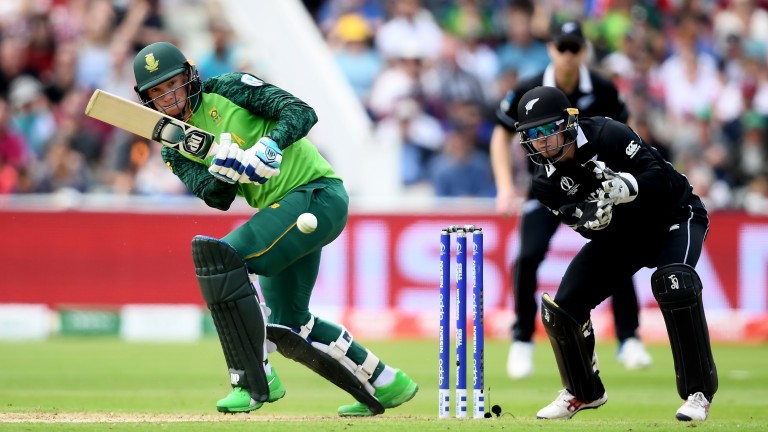 Anyone watching South Africa’s ODI series against Sri Lanka in March might have concluded that the Proteas were serious World Cup contenders and the Lankans would be exposed by the best teams in the world.

However, South Africa – comprehensive 5-0 winners of that home series – have lost five of their six completed games at the tournament while Sri Lanka’s stunning win over England kept alive their slender chances of making the semi-finals.

They were 8-1 to beat England and are 7-4 outsiders against the Proteas when the tournament arrives at the Riverside in Chester-le-Street.

As with an end-of-season football match, punters must weigh up the significance of each team’s motivation.

Despite their rout of Sri Lanka at home in March, it is hard to have faith in South Africa, who fluffed a great chance of victory against New Zealand before a lacklustre display against Pakistan at Lord’s last time out.

Best bets
The match betting looks a trappy heat given the contrast between South Africa’s dominance when the teams last met and their disappointing efforts at this tournament.

The Proteas make little appeal at the odds but the question is whether Sri Lanka can be trusted to follow up their win against England.

Their bowlers bailed out the batting unit at Headingley – they were 18-1 in-play after setting England only 233 for victory and they were bowled out for 136 by New Zealand, 201 by Afghanistan and 247 (having been 153-1) by Australia.

Imran Tahir, one South Africa player who has delivered at this tournament, should be looking forward to a crack at the Lankan batsmen.

The 40-year-old leg-spinner took nine wickets in four ODIs against Sri Lanka in March and should add to his tally of ten in six innings at this World Cup.

Tahir bowled beautifully in the defeat to Pakistan at Lord’s, dismissing both well-set openers to finish with 2-41 from ten overs in an innings in which his side conceded 308.

He claimed 4-29 against Afghanistan in the Proteas’ only win and picked up two scalps against England, taking out Jonny Bairstow with the second ball of the tournament and returning to dismiss Eoin Morgan.

The evergreen leggie also took two wickets against Bangladesh, bowling the in-form Shakib Al Hasan, and that return would be enough to take him over bet365’s performance line of 39.5.

Quinton de Kock racked up 353 runs in his last five innings against the Lankans but preference is for Rassie van der Dussen at 7-1 to be top runscorer.

The middle-order man brings purpose and energy to the innings almost every time he bats and only De Kock (238) has more than his 216 World Cup runs for South Africa.

Van der Dussen, who scored 93 and 80 not out in his first two ODIs against Pakistan in January, made 50 in the defeat to England and top-scored with 67 not out against New Zealand.

Venue
Nine of the 14 completed ODIs at the Riverside have been won by the team batting second and England chased down 311 to beat Australia last year with more than five overs to spare.

Weather
Overcast start to the day before a sunny afternoon with temperatures reaching 17C.