England may struggle in second innings 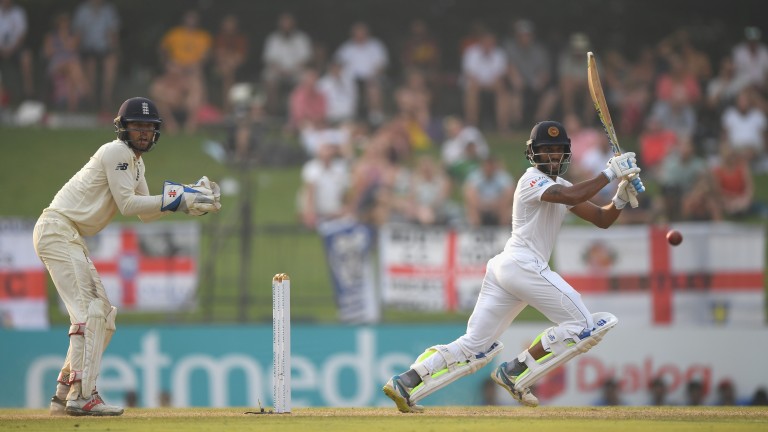 Sri Lanka eked out a 46-run lead over England following a cut-and-thrust day two in Pallekele and bookmakers now make the hosts 8-11 to level the series at 1-1 even though they will have to bat last on a pitch that noticeably assists all spinners.

However, just as the duo looked like seeing out the session in the clear ascendancy, a brilliant Ben Stokes one-stump run out ended Karunaratne's knock on 63. Then a one-hand snaffle at slip off Jack Leach removed Kusal Mendis before he got had started. Sri Lanka lunched on 139-4.

Soon after the first interval, Adil Rashid removed Da Silva for 59 and added Angelo Mathews once he seemed settled on 20. But yet again it was not one-way traffic in a session with Roshen Silva and Niroshan Dickwella taking the hosts past 200, although Dickwella departed before tea to Joe Root for 26.

After tea, Roshen and the tailenders took Sri Lanka beyond England's adjusted total of 290 - five penalty-runs were added as a result of the umpires' declaring a Sri Lanka short-run intentional - to 336 with calculated, stubborn resistance.

Roshen's one six - the only maximum of the innings - came 11 overs before his final-wicket exit for 85.

England, now 6-4 shots to go 2-0 up and seal a series success, saw out the one over before stumps without score or loss of makeshift opener Leach.

Star of the day

Ben Stokes produced two champagne moments with his run out and catch before lunch but Roshen's grit and determination at the crease mean he deserves this accolade.

Sri Lanka could well have crumbled meekly - like they did in Galle last week - to leave England on top, but instead Roshen's knock has transferred all the pressure to perform on day three to the Three Lions.

Roshen has now scored one ton and four fifties in 16 Test innings and while he will probably never have the style and panache of greats like Mahela Jayawardene and Kumar Sangakkara, the outlook for taking consistent compiling in the domestic game to international level looks decent.

Showers are on the forecast for the final three days at the Kandy venue. However, the fact that the draw is 12-1 suggests plenty of play will still take place and either the turning nature of the pitch will not change or moisture-induced swing will become a factor for Lakmal, Mathews, James Anderson, Sam Curran and Ben Stokes.

England to get 250 or fewer in their second innings looks the wager.

The Three Lions have mustered 342, 322-6 and 290 (285 originally) in their three innings in Sri Lanka but they have recovered from slow starts or lost wickets in clumps in all three and before their win in Galle had not won an away Test for 13 matches.

If showers materialise then as well as bringing Lakmal's late swing into the game the frequent breaks will not help England's concentration against the home spinners.

And if there is no rain Dilruwan Perera, who has taken 11 wickets in the series, and his fellow spinners can twirl away exacting grip and bounce without worry.

With Leach resuming as Rory Burns's partner, there is likely to be early joy for Sri Lanka. And while a shift down one place in the order for Keaton Jennings and the rest does not look disruptive, a short or long stay at the crease by Leach could affect their mental processes.