Springboks may lack intensity to shut down France attack 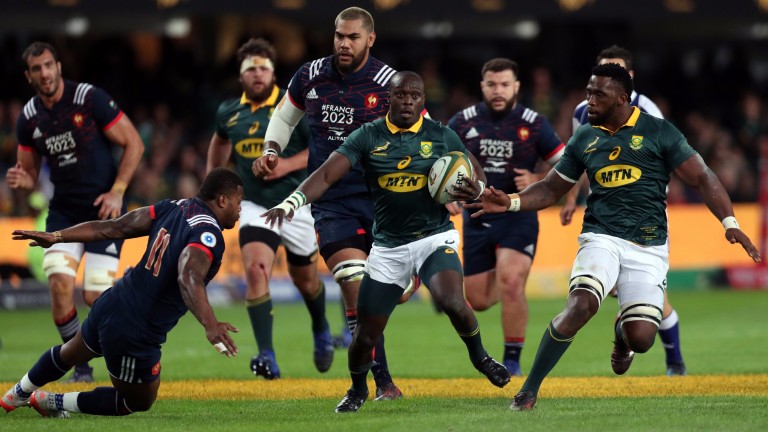 Raymond Rhule breaks for South Africa in the second Test against France
Gallo Images
1 of 1
By Graham Woods 7:30PM, JUN 23 2017

South Africa have already sealed their Test series against France with victories by almost identical scorelines - 37-14 first up in Pretoria then 37-15 in Durban last week - and it's back up to altitude in Johannesburg for the final meeting.

The margins have been surprisingly comfortable for the Springboks given they managed just four victories in 12 outings last year and endured a run which included a record home defeat - 57-22 to New Zealand - and a first loss to lowly Italy.

Head coach Allister Coetzee will surely feel the pressure lifting on his players after the fallout of their year to forget but he will also be concerned not to let players' performance levels drop with the series won.

France must feel they should have more to show for their efforts. In Pretoria they were right in the game on the hour mark at 16-14 down before full-back Brice Dulin was sin-binned for a tackle off the ball, which also led to the award of a penalty try, and they shipped two more tries when down to 14 men.

Last week in Durban Les Bleus scored the first try after just three minutes and topped the possession and territory stats, particularly in the second half when their figures were around 75 per cent.

They made all the running and twice as many passes as the Boks but could not make it count on the scoreboard as the hosts defended ferociously. At one point the Springboks held out as France put 27 phases together but still could not breach the lines.

Coach Guy Noves has made changes and there is plenty of attacking flair in his backline, although he names a third half-back combination in as many games of Baptiste Serin and Jules Plisson.

The intensity of the Springbok defence is likely to be lessened with the series in the bag and this looks set to be an open, high-scoring game.