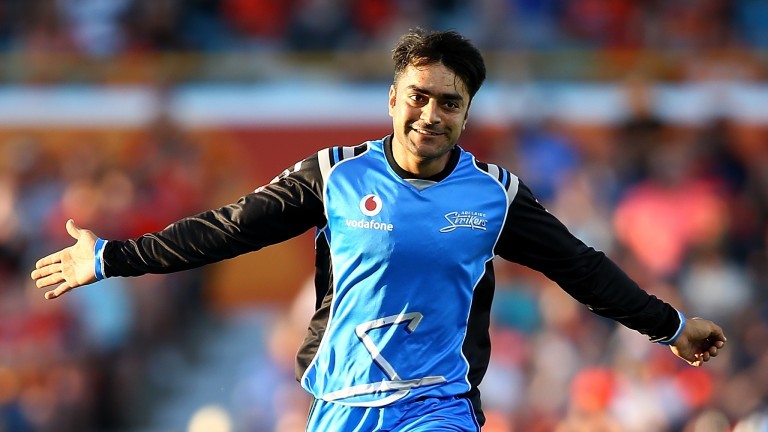 Afghanistan's Rashid Khan has impressed in the Big Bash and the Indian Premier League
Paul Kane
1 of 1
By James Milton 8:00PM, MAY 6 2018

Bangalore's star-studded batting line-up flopped again on Saturday and it is hard to trust the Royal Challengers against Sunrisers Hyderabad, who boast the best bowling attack in this season’s IPL.

While Bangalore staggered to 127-9 on their way to a defeat to Chennai, Hyderabad nailed a chase of 164 against Delhi to go top of the table.

Unflappable Sunrisers captain Kane Williamson was there at the end for his side’s seventh win in nine games and the Kiwi’s consistency contrasts with Bangalore’s top order.

Williamson was helped by another stellar performance from Afghanistan spinner Rashid Khan, who took 2-23 in four overs, dismissing the well-set Prithvi Shaw and the dangerous Rishabh Pant.

The leg-spinner has a chance to pick up more illustrious scalps against Bangalore, with Virat Kohli and AB de Villiers in his sights.

Rashid seems to enjoy the pitches at Hyderabad, taking 3-19 against Kings XI Punjab there on April 26. India internationals Lokesh Rahul, Karun Nair and Ravichandran Ashwin were his victims that day and he looks overpriced to be man of the match at a ground where batsmen have struggled this term.