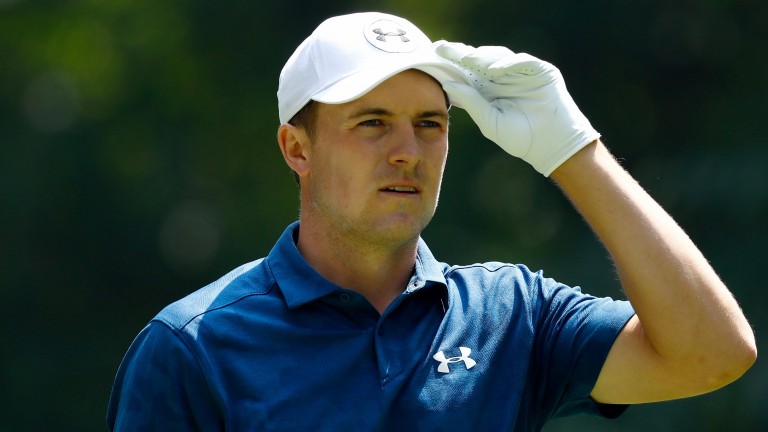 Jordan Spieth opened his back nine with five consecutive birdies in round two of The Northern Trust, the Open champion claiming a share of the lead at the halfway stage.

Spieth, 12-1 second-favourite behind Hideki Matsuyama ante-post, has reached six under par through 36 holes of the opening FedEx Cup playoffs event. Glen Oaks, making its US Tour bow, has been playing tough and only 31 of the 120-runner field are under par.

Spieth is tied atop the leaderboard with world number one Dustin Johnson, Rickie Fowler and Jhonattan Vegas. Spieth is 100-30 market leader with two rounds to go, with Johnson at 4-1, Fowler at 9-2 and Vegas at 25-1.

Matsuyama missed the cut, a bogey at his final hole slipping the Japanese raider under the cut line, while Rory McIlroy has a mountain to climb from one over par, seven shots off the pace.

Spieth and Johnson looked the pick of the market principals before the off at 12-1 and 14-1 respectively, and the tournament appears even more likely to become a duel between the two American superstars after their bright starts.

Spieth and Johnson are the pair to concentrate on for outright punters, with Spieth arguably having the edge given the course is drying out, playing firm and fast, becoming an extreme short-game challenge.

Jon Rahm, Russell Henley, Patrick Reed, Patrick Cantlay, Daniel Berger and Justin Thomas are dangerous players lurking just off the pace, but Spieth and Johnson should be difficult to shift from the front. Fowler is also likely to float around the lead all the way to the finishing line, so the chasing pack have a daunting task.

Third-round twoball punters are pointed towards Rahm in the 6.20pm (UK and Ireland time) match against Justin Rose. The putting stroke of Rose is so poor that he piles pressure on his approach-play. He needs to get his ball stone-dead to be confident of making birdie.

A sunny day with light breezes is forecast. The fast, undulating greens are the main defence of the course. Rahm, who is always full of self-belief with driver and putter in hand, can stay in the title hunt as Rose drops away.