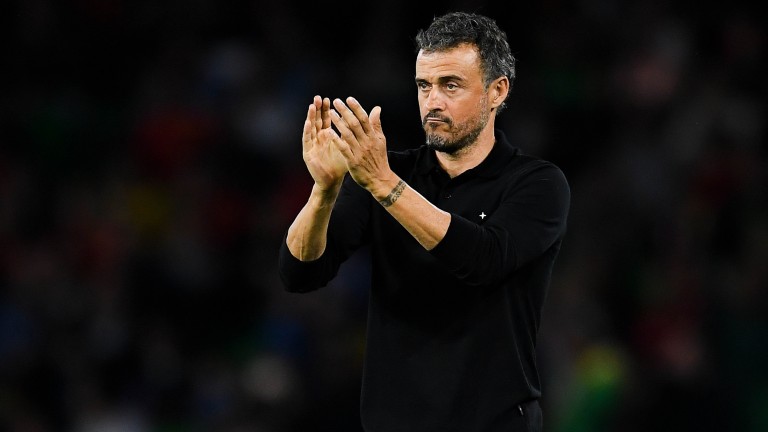 Both teams have had their preparations disrupted but there is enough attacking quality on show to suggest odds-against quotes about the net bulging at each end are worth capitalising on.

Spain
Sergio Busquets is self-isolating but Diego Llorente has rejoined the squad after a negative test.

Sweden
Dejan Kulusevski and Mattias Svanberg are both set to miss out with Covid.

Spain and Sweden have both had their Euro 2020 preparations jolted by cases of coronavirus but the disruptions shouldn’t take away from the entertainment in their opening salvo in Seville.

La Roja had their entire squad vaccinated on Friday and are missing Barcelona leader Sergio Busquets, who returned a positive test, while the Swedes will be weakened by the absence of Juventus ace Dejan Kulusevski and Mattias Svanberg.

Spain are fortunate that their midfield area, so often marshalled by Busquets, is their strongest department and although Sweden will feel the loss of bright spark Kulusevski, Janne Andersson has more burgeoning young talent at his disposal.

Home advantage should be a big aid to Spain, who hit Germany for six in November’s Nations League clash in Seville, but this Sweden side look more adept than the one who chased La Roja home in qualifying for this tournament.

Spain finished unbeaten in their ten Euro 2020 qualifiers, silencing the Swedes 3-0 in Madrid before the pair played out a 1-1 draw in the return fixture in Solna.

But there have been too many abject performances from this Spain squad of late to suggest getting stuck in at short prices, particularly when you consider their players have been isolating and forced to train on their own.

A 6-0 mauling of the Germans was a particular high for Luis Enrique's men, but that was sandwiched between 1-1 draws with Switzerland and Greece.

Spain also needed a 92nd-minute strike from Dani Olmo to grind out a 2-1 World Cup qualifying victory in Georgia in March before making hard work of seeing off Kosovo 3-1 at home.

Not only are there worries over players’ fitness but there are defensive concerns for Spain as they adapt to life without Real Madrid’s Sergio Ramos, who was a shock omission from the squad.

Zlatan Ibrahimovic’s injury takes away some gloss from the Swedes, but they have unearthed a new star in Alexander Isak, who fired home 17 goals in 34 La Liga outings for Real Sociedad this season.

Bundesliga boys Emil Fosberg (Leipzig) and Robin Quaison (Mainz) provide Isak with the creativity from midfield and between them they can cause plenty of problems for Spain, who have scored and conceded in four of their last five competitive fixtures.

Sweden have conceded in six of their last eight competitive matches.

Both teams to score
There have been goals at both ends in four of Spain's last five competitive matches and Sweden have the attacking quality to keep that run going.

Over 6.5 Spain corners
Spain and Sweden locked horns twice in Euro 2020 qualifying and La Roja racked up 27 corners over those meetings.

Kristoffer Olsson to be booked
The Krasnodar man has picked up 13 yellow cards from 44 starts for club and country this season and his midfield position will come under intense pressure against a possession-based Spain.

The treble pays 9-1 with Betfair