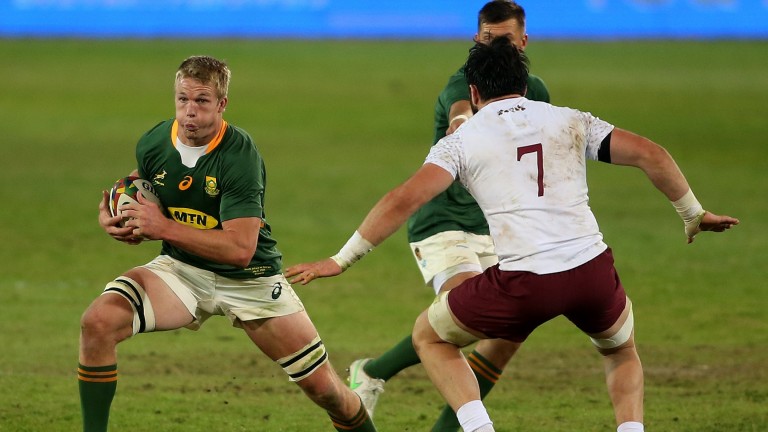 The British & Irish Lions were always going to face a step up in class in Wednesday's clash with South Africa A, but they are going to need to find their A game against a line-up close to being a first-choice Springbok Test side.

The Lions players and coach Warren Gatland were quick to dub the match a "fourth Test" as they prepare to face a team with only two uncapped players in the squad, only four more with fewer than ten full Test appearances under their belts, and a total of 18 World Cup winners' medals to their names.

It's an understandable approach from the Boks, whose only outing since the Rugby World Cup final more than 18 months ago was a run-out against Georgia in June - and even then a scheduled second meeting the following week had to be called off.

The Boks are desperately short of prep time for the Test series, which starts on July 24, and Gatland has said he welcomes the tougher test after some fairly straightforward workouts against provincial opposition.

It's hard to believe either team will show their full hand but given the Boks have spent less time together and on the pitch, they may well bring more intensity and physicality into the game.

Against that there may a lack of cohesion and fluency, and they took time to get going against Georgia before easing to a 40-9 victory. Captain Siya Kolisi is still missing for the Boks, while coach Jacques Nienaber is also isolating, but Rassie Erasmus, who was head coach for the World Cup success, has gone back to a more hands-on role.

The Lions racked up their biggest score of the tour on Saturday, running 71 points past the Sharks, but they also shipped 31, and they have to be prepared for a very different game in Cape Town.

It could well be a stop-start affair as both sides look to gain an upper hand in the set piece, an area where the Boks struggled at times against Georgia, and it will be no surprise to see a few penalties given up.

On the 2009 tour the Lions were held 13-13 by the Emerging Springboks, while in 2001 Australia A emerged victorious, and given the strength of this South Africa team they look value at odds-against in what could be an edgy, scrappy game.

The Lions have gone with six forwards on the bench and look set to focus their efforts in the pack. There are some sharp runners in the Bok backline in the shape of Cheslin Kolbe and Lukhanyo Am, while Josh Adams lines up on the wing again for the Lions with eight tries to his name already.

But if it turns into an attritional battle the tries could well come from close range rather than out wide. Flanker Pieter-Steph du Toit had a strong game against Georgia and looks value to add to his haul, while scrum-half Conor Murray has scoring pedigree for Ireland and the Lions, having crossed in the second Test against New Zealand in 2017.