Sonny delight is a juicy bet for Tottenham at Bournemouth 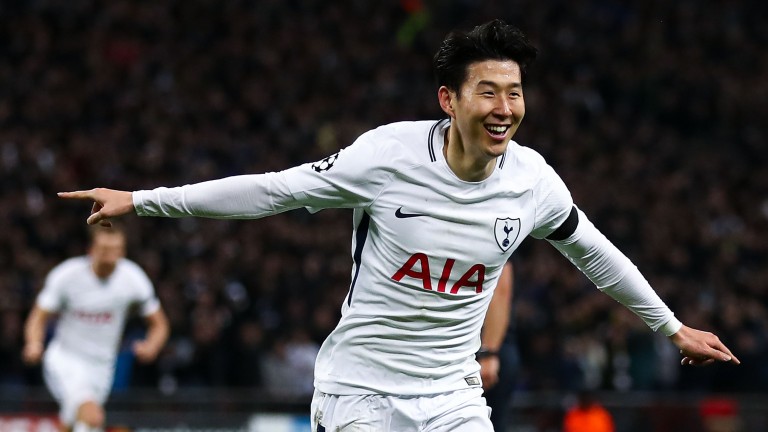 Heung-Min Son could have plenty to smile about at Bournemouth
Catherine Ivill
1 of 1
By Mark Langdon 8:00PM, MAR 10 2018

Tottenham will have to quickly get over their Champions League heartbreak if they want to return to Europe's elite competition as the battle for the top four Premier League places is fierce.

Spurs could be more vulnerable than usual given the nature of their painful defeat to Juventus on Wednesday after they dominated for long periods, although there is a 25-point gulf between themselves and Dean Court hosts Bournemouth which should tell.

Manchester City are the only side to have beaten Spurs in the Premier League since the start of December and, while they left it late on their previous road trip, Mauricio Pochettino's team deserved their victory against Crystal Palace.

It was Harry Kane who shot down the Eagles and he usually picks off the Cherries at will, scoring six times in four appearances against them with a minutes-per-goal figure of just 57.

However, Heung-Min Son has been a huge threat for Spurs this season and Sonny can delight the travelling Spurs faithful with the opener.

The South Korean has notched only twice on the road this season but those quirks usually even themselves out and he gave Andrea Barzagli a tough time at Wembley, notching first before Juve's come-from-behind win.

Pochettino will have had to work hard to lift the Spurs dressing room and Bournemouth must hope that morale-damaging result against Juventus will aid their hopes of claiming the scalp of another big-six club following their wins over Arsenal and Chelsea in 2018.

Bournemouth have gone six games unbeaten at home and Liverpool were the last visiting side to win at Dean Court just before Christmas. Eddie Howe's men managed to score at least twice in all six of those contests.

Callum Wilson and Josh King can be a threat, although Bournemouth are set to be weakened in the wing department due to injuries which may curtail their attacking threat and it could be a huge problem given the defensive issues Howe is trying to rectify.

Bournemouth's only clean sheet in 12 home games came against Huddersfield and they have recorded just one shutout in their last 19 matches in total - oddly the clean sheet came in a 3-0 win at Chelsea.

In recent weeks Huddersfield, Newcastle and Leicester have created plenty of opportunities against a Bournemouth side who are overachieving considerably in attack and defence according to expected goal calculations.

Six of the last seven teams to visit Dean Court have scored first and if Bournemouth fall behind they are unlikely to be good enough to launch a Juve-style comeback.

Team news
Bournemouth
Tyrone Mings remains out and Marc Pugh is a major doubt. There are also concerns regarding Ryan Fraser and Jordon Ibe.

Key stat
Bournemouth have scored only once in five Premier League fixtures against Tottenham.