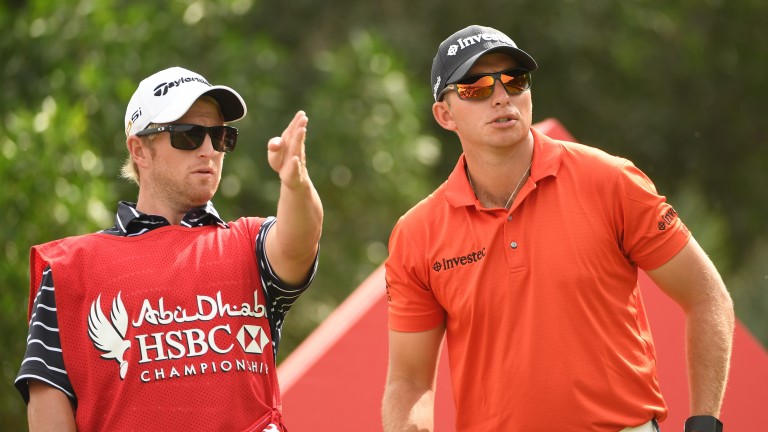 Dean Burmester is favourite going into the final round
Getty Images
1 of 1
By Steve Palmer 4:55PM, MAR 4 2017

Alexander Bjork and Scott Jamieson share the lead going into the final round of the Tshwane Open at Pretoria Country Club, the European raiders reaching 13 under par through 54 holes.

Bjork, freely available at 66-1 ante-post, and Jamieson, a 150-1 rag at the outset, both birdied their final hole of round three to edge ahead of Jorge Campillo and Dean Burmester.

Bjork was two shots clear at the top of the leaderboard through 12 holes of round three, but bogeys at the 13th and 15th drew the Swedish maiden back to the pack. Jamieson is seeking a second European Tour title, having won the Nelson Mandela Championship in 2012.

Ante-post market leader George Coetzee lost his marbles in round two to miss the cut, but 16-1 second-favourite Burmester is still well in the hunt for a European Tour breakthrough.

Alexander Bjork looked set to take an advantage into Sunday, having played wonderfully solid golf for 12 holes of round three, but his ship was unsteadied by a pulled approach into a greenside bunker at the 13th.

Bjork's first bogey of the round resulted, swiftly followed by a short missed par putt at the 15th, opening up the tournament. A brave birdie at the 18th put the maiden back on track, salvaging a share of the lead.

The bookmakers are probably right, given Jamieson has been victorious on the European Tour before, but there is still every possibility that Bjork stays calm enough to make his breakthrough. Bjork's golf for the vast majority of round three was excellent and at one stage he looked like a seasoned veteran, pulling away from the front.

The dimensions of Pretoria Country Club are perfect for Bjork to showcase his tee-to-green accuracy, and this cool customer can be fancied to contend all the way to the finish line. He won on the Challenge Tour last summer in a tight tussle, claiming Le Vaudreuil Challenge glory by a shot, and seems comfortable with his lofty position on the board. Having his father caddying for him this week may be helping his state of mind.

It is important to note that Jamieson has never won a 72-hole event on the European or Challenge Tour. Not even a 54-hole one, in fact. The Scotsman's lone success came in the weather-ravaged, 36-hole Nelson Mandela Championship.

Jorge Campillo is an unconvincing maiden, and the biggest challengers to Bjork and Jamieson are probably Dean Burmester and Thomas Aiken.

Burmester has been in fantastic form, but he knows this is his final chance in his homeland to claim a European Tour card for this season. Burmester buckled badly under the pressure of chasing playing rights when favourite going into the final round of last week's Joburg Open and he may tighten up again on Sunday.

Aiken fired a 62 in round two and possesses all the tools to score well at this track. From just three shots behind, the three-time European Tour champion is still well in the hunt.

Bjork was a Racing Post Sport ante-post selection at 66-1, and hopes are high for the solid Swede. Cautious punters who are aboard to decent stakes at that price may want to consider some final-round cover on Jamieson, Burmester and Aiken.

Final-round twoball punters are pointed towards Aiken, who should know too much on home turf for Lancashire-born youngster Ben Eccles in the 10.03am UK and Ireland time contest.

Dual Pretoria Country Club champion Hennie Otto should be trusted for his 8.55am meeting with Scottish raider Duncan Stewart, while another course winner, Vaughn Groenewald, should prove too steady for Jose-Filipe Lima in the 8.28am match.