Solid Clayton can give Diamond a rough old time

Champ Anderson could struggle with the slow pace 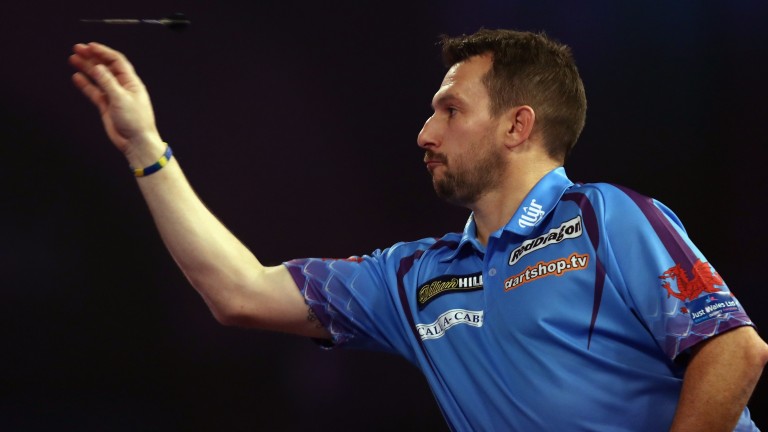 Gary Anderson and Adrian Lewis, who have shared four William Hill World Championship titles over the past six years, are in second-round action at Alexandra Palace having barely broken sweat in their openers.

Defending champ Anderson, who dropped just two legs in a demolition of Mark Frost in round one, is 1-16 to beat Andrew Gilding while Lewis, who whitewashed Magnus Caris, is 1-3 to see off Joe Cullen.

White v Clayton
No previous meetings
Jonny Clayton’s World Champion­ship debut was impressive enough to suggest he can give Ian White a test in the opening match of round two.

Clayton beat fellow Welshman Gerwyn Price 3-1 in his opening spat and would have won 3-0 but for a handful of missed doubles at the end of the first set.

His scoring, though, was rock solid with 46 ton-plus scores in 18 legs – compare that to White who hit 29 in 14 legs against Kevin Simm.

White’s a three-time winner on tour but still doesn’t always convince on the big stage and Clayton could easily run Diamond close.

Michael Smith smacked in seven 180s during 20 entertaining legs against ‘Rapid’ Ricky Evans in his opener, while Mervyn King notched just two in 27 legs of his gripping encounter with Steve West.

It’s hardly a surprise that Bully Boy is 2-5 to boss the maximums, but the better advice is to take him at evens giving 2.5 180s on the handicap.

Smith, whose win against Evans was his first in three months, looked in a good rhythm last Thursday night and that bodes well for an avalanche of treble 20s.

King, in tears after finding a way past good pal West, had no rhythm whatsoever and is hard to fancy.

Benito van de Pas will be encouraged by the fact that he beat Terry Jenkins at the Grand Prix in October, though there were only two legs in it.

El Tel will be equally encouraged that he avoided a potential banana skin in round one, coming from a set down to topple starlet Josh Payne.

This match looks tough to call. If Van de Pas can match the 61 per cent checkout stats he managed against Tengku Shah, then he’ll take some stopping.

But in a best-of-seven shootout? That’s a lot to ask and his doubling wouldn’t have to drop much for the Raging Bull to stampede him.

Darren Webster was fancied in the Racing Post to get the better of Stephen Bunting in round one and it may pay to stick with the Demolition Man against Simon Whitlock.

The Wizard has made lots of strides in 2016 and lost just one leg against Dragutin Horvat in round one.

But Webster beat Whitlock in round one at the Palace two years ago and also defeated him 6-3 in the Players Championship Finals last month. He’s the value to oust him again.

Reigning champion Gary Anderson has won all three matches against Goldfinger – though all three went to a deciding leg.

Andrew Gilding won’t be rushed and that doesn’t bring out the best in Anderson, who is 5-4 to win 4-0.

It’s hard to see the Scot losing but he may not shine in a match that is unlikely to suit his free-throwing style. Don’t go expecting a ton-plus average.

Joe Cullen has lost his last nine against Adrian Lewis but if anything is to give the Yorkshire­man confidence going into another tussle with the dual world champion it’s the way he played in round one.

Cullen had a brute of a draw against young Aussie Corey Cadby and had to produce a 100 average just to get home. It was brilliant from Cullen, who knows he has the tools to scare Jackpot.