Sodhi can star again for Kiwis at Bay Oval 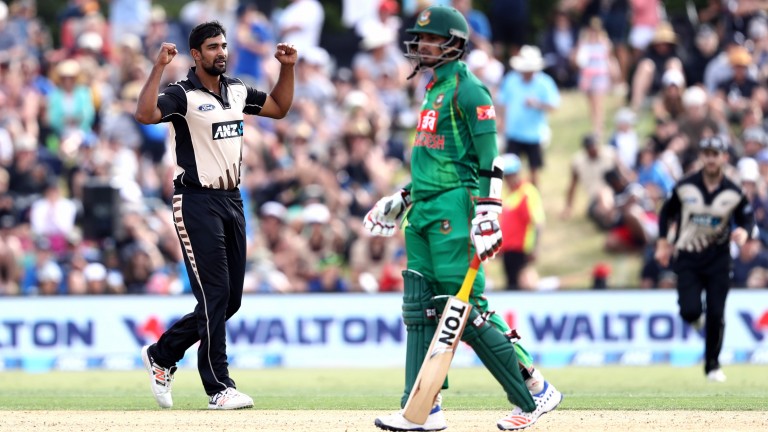 Ish Sodhi took 3-36 and the New Zealand bowling honours as they beat Bangladesh by 47 runs in Friday’s second T20 at the Bay Oval and the leg-spinner looks a value bet to follow up in Sunday's series finale at the same Mount Maunganui venue.

Sodhi was recalled by the Black Caps because he plays plenty of white-ball cricket for Northern Districts at Bay Oval and he is unlikely to be dropped after that display, especially if the same pitch is used again meaning more grip for spinners and variable bounce.

The rest of the frontline Kiwi attack is hard to pin down with the series already won 2-0, the domestic T20 final between Central Districts and Wellington on Saturday and a two-Test series between the teams starting next week.

In-form quick Lockie Ferguson has played three games in a week, Ben Wheeler must rush back from the domestic final and Trent Boult and Mitchell Santner may be rested because of their five-day importance.

Matt Henry is available again after playing for Canterbury on Thursday and it is worth noting that the paceman has taken 3-44 and 5-40 in his two international limited-overs outings at Bay Oval. But preference is for Sodhi, who took ten wickets in last year’s World T20 including 3-18 against India and 3-21 against the Tigers.

Keeper Luke Ronchi is injured and it would not be a surprise if New Zealand shuffle their batting order around and Bangladesh make changes. So for a second wager take skipper and keeper-opener Tim Paine to top-score for the Hurricanes against the Thunder in the Big Bash League.

Paine has amassed 218 runs in his five knocks with a best of 91.
Both games so far in Hobart have been won comfortably by the chasing side.