Ronnie O'Sullivan can scythe through bottom half in Sheffield 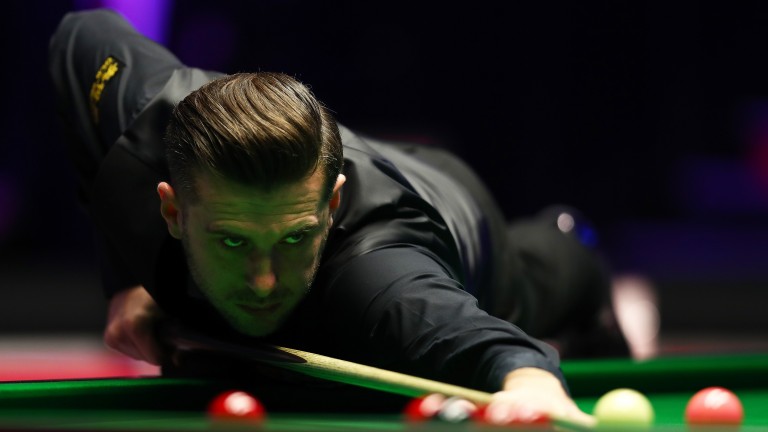 King of the baize Mark Selby has become a well-oiled machine
Naomi Baker
1 of 1
By Adrian Humphries UPDATED 5:00PM, APR 20 2018

Humphries's top tip
Mark Selby 9-2
Mark Selby's 25th career title in the China Open took a long time coming but when it finally arrived, gosh was it worth waiting for and that fillip came at a perfect time for him to land a third straight Betfred World Championship crown.

With Ronnie O'Sullivan having dominated the 2017-18 season, green-baize fans were waiting for a response from world number one Selby.

The Jester from Leicester had bossed the previous campaign, not quite as emphatically as the Rocket has this current one but still enough to enable Selby to put light years between himself and the chasing pack in the rankings.

O'Sullivan has taken up the challenge of trying to catch Selby with zest, but pocketing five key titles has seen him rise only to second on the planet.

There's work still to be done for O'Sullivan and it's just possible that focusing on trying to narrow the gap between Selby and himself could lessen the pressure of bidding to capture a sixth world crown.

But it shouldn't be forgotten that Selby goes to Sheffield considerably fresher than was the case last season, when he found semi-final opponent Ding Junhui and John Higgins his toughest adversaries.

Higgins carved out a tidy 10-4 lead in the final, but Selby was absolutely magnificent in reeling in the seasoned Scot to make it three world titles in four years.

Selby was a whopping 9-1 for Beijing, but he never drifted to any bigger than 13-2 for another Crucible triumph.

Of course, such odds have long since disappeared but Selby is number one for a reason and the world's best player has become such a well-oiled machine he still looks value at his current odds.

Next best
Ronnie O'Sullivan to reach final 5-4
O'Sullivan recently admitted that Selby and Higgins are his chief title rivals, but with that pair in the opposite half of the draw there's little to stop the Rocket enjoying another decent tournament.

Ding Junhui and Neil Robertson would seem to be his biggest rivals, but Ding was hammered 10-3 by O'Sullivan in the World GP title decider while Robertson struggled to defeat Cao Yupeng in the Scottish Open final in December.

Barry Hawkins and Mark Williams have been performing well but neither are fancied to stop O'Sullivan, so after Ding and Robertson the Rocket's biggest danger could be a potentially tricky opener against dangerous qualifier Stephen Maguire.

Other selections
John Higgins to win second quarter 15-8
Jamie Jones 300-1
Higgins has achieved more than Judd Trump this season so the Wizard of Wishaw, a four-time title winner at the Crucible, should have the form and self-belief to come through the second quarter of the draw.

O'Sullivan remarked recently that Higgins' A-game is as complete as anyone's. That's absolutely true but the younger Selby would now appear to have the beating of the Scot judging by last year's final, so make do with backing the Welsh Open champion to boss his quarter.

For a second outright title punt, it would be foolish to miss chancing Jamie Jones at the prices.

Inexperience prevented the Welshman from going deeper than the quarter-finals in 2012, but the Neath ace finally looks to have rediscovered the focus and form that saw him top the tournament-ton-up point chart six years ago.

Jones, who has beaten first-round opponent Shaun Murphy previously at the Crucible, hammered Liang Wenbo in the final qualifying round and could well be a threat to anyone he meets.