Finau and Rodgers are loving the course layout 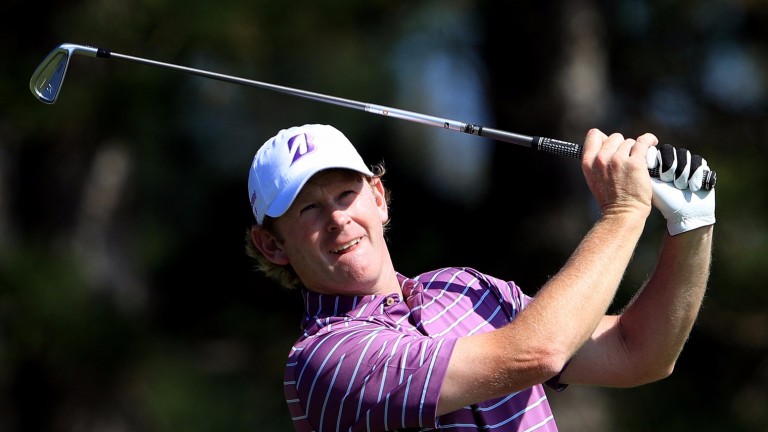 Defending champion Brandt Snedeker is tied for the lead with 18 holes to play in the Farmers Insurance Open at Torrey Pines, the California specialist having reached nine under par through three rounds.

Snedeker, a 28-1 chance ante-post, has won eight times on the US Tour and half of them have come in California. He won the Farmers in a playoff in 2012, taking advantage of final-hole howlers from Kyle Stanley, then again last year after a brilliant final-round 69 in brutal weather.

Snedeker will not have to face any rough stuff this time – a sunny day, with light breezes is forecast – and the joint-leader is no bigger than 3-1 to complete a Farmers hat-trick.

Patrick Rodgers, who was 175-1 ante-post, is alongside Snedeker at the top of the board. The classy youngster, runner-up to Rory McIlroy in the 2015 Wells Fargo Championship, is available at 15-2 to make the Farmers his maiden victory.

Brandt Snedeker has had to overcome big leads to win this tournament before – he was seven behind after 54 holes in 2012, then six back through three rounds last year. Winning the Farmers from the front is new territory.

Swing changes can flourish in the early stages of tournaments, but in the pressure cooker of a Sunday shootout, the urge to go back to 'what you know' can be overwhelming. Snedeker has not done anything drastically different with his technique, but this is a serious test of the state of his game in the post-Harmon era. Torrey Pines will expose any weakness.

Snedeker is obviously supremely comfortable on this course and putts on the Poa annua greens better than anyone, but the suspicion is that he has loose drives and wayward approaches in him today. He missed the cut by two shots in the Sony Open on his last outing and has not won on the US Tour for 12 months.

This is the ninth time Snedeker has had a lead or co-lead going into the final round on the US Tour, and he has converted three of those chances. He was peppering pins in round three and has to be favourite, but a congested leaderboard makes this event wide-open.

Patrick Rodgers has plenty of course knowledge to draw upon – he went to university in California and has countless rounds at Torrey under his belt – and the long, soft track plays to his strengths. He matched the win record of Tiger Woods at Stanford and has been marked down as a youngster of immense potential for a few years.

The driving of Rodgers has been sensational this week and he has fallen in love with Callaway's new Epic driver. He tops the driving distance stats at Torrey and will be dominating Snedeker in that respect today. His putting has been good, too, over the first three days, with a new Odyssey Indianapolis mallet putter.

Rodgers, like Tony Finau, has been loving the soft turf at Torrey, which has been battered by storms in recent weeks. These two powerhouses can be expected to assert themselves in round four. Snedeker has the edge with putter in hand, but Rodgers and Finau can bully him off the tee in the final threeball.

There are a host of other players who can enter the mix from behind the front four, so a thrilling shootout probably lies in store. Racing Post Sport followers can enjoy it from a position of strength, with three ante-post each-way investments in the top five. Rodgers
(175-1), Finau (66-1) and Harris English (90-1) are all bang in contention and will hopefully deliver a strong yield.

Final-round threeball punters are pointed towards Emiliano Grillo in the 4.25pm match. Grillo has failed to find top gear over the first three days, trailing by six shots, but Torrey Pines South is a perfect layout for the Argentinian to show off his ball-striking talent.

Grillo won the Junior World Championship at Torrey Pines in 2009 and his tee-to-green excellence should be enough to see off weak opposition today in the form of Michael Thompson and Sebastian Munoz. It is a surprise to see odds-against quotes about the world number 25.

Finau at 17-2 is the recommendation for in-running punters eager for an outright bet at this stage. The final threeball is due on the tee at 6.15pm UK and Ireland time.