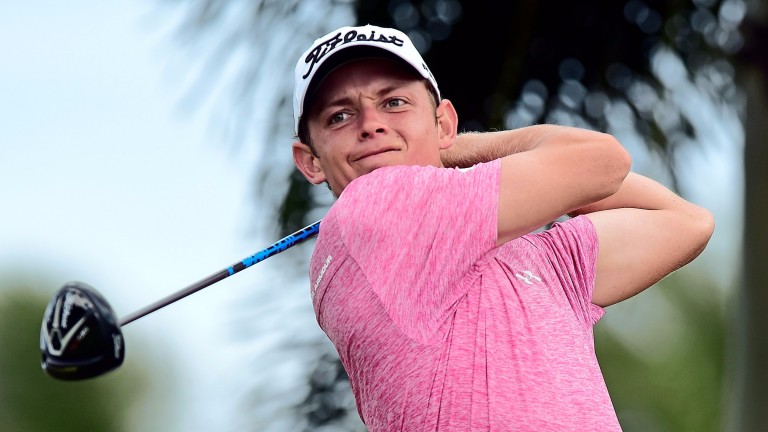 Palmer’s top tip
Cameron Smith 16-1
Adam Scott is no better than 4-1 for the Australian PGA Championship, but the short-priced favourite can be left alone after a fortnight of unconvincing golf.

Scott’s short-game was in poor nick in the Australian Open, where he tied for 14th place in a humdrum field, and he failed to take advantage of vast course knowledge in the World Cup of Golf at Kingston Heath last week.

Scott and Marc Leishman tied for ninth spot in a 28-team event for which ten of the sides were 125-1 or bigger ante-post.

Scott’s course credentials are less convincing for the PGA. He has been talking up his chances, explaining how he has 20 years of playing experience at Royal Pines, but the track has been dramatically revamped over the last two years.

Changes which started prior to the 2014 PGA were completed for the 2015 tournament, but neither Scott or Leishman entered last year’s event.

Scott won by four shots at Royal Pines in 2013, but all 18 holes are different now. New turf means less run on the fairways, water is more in play, the greens are smaller and more undulating, and level-par was enough to top the leaderboard after 72 windswept holes last year.

A more attractive option at a much bigger price is a fast improving youngster who has hit top form, is playing in his home state of Queensland, and is proven on the new Royal Pines design.

Cameron Smith, who showed a liking for difficult golf when finishing fourth on his Major debut in the 2014 US Open, has finished ninth and fifth in the last two Australian PGAs.

Those two bold efforts at Royal Pines are all the more impressive when you consider Smith opened with nervous rounds of 74 and 78 respectively. There is every reason to believe this increasingly assured 23-year-old will get out of the blocks quicker this time.

Smith has a US Tour card in his pocket, courtesy of a gutsy runner-up finish in the final Web.com Tour event of the year, and he has started the new US Tour season with solid form figures of 35-11-10-42.

Career security has helped this rising star relax and last time out in the Australian Open he threatened a breakthrough victory yet again, before losing in a play-off to Jordan Spieth.

A slow start cost Smith in the Australian Open – his first round was eight shots worse than his last – but he has been handed the perfect tee-time from which to ping the lids at Royal Pines.

Smith is first out from the tenth tee at 6am local time, so he can enjoy cool, calm conditions and fresh greens. It is an added bonus not to have to face holes one and two (both extremely difficult) straight from the gate.

Next best
Ryan Fox 28-1
Also teeing off at 6am local time and able to lay a strong foundation for the week is Ryan Fox, another player climbing the world rankings at pace and full of beans having recently taken his career to the next level.

Fox, winner of the Queensland PGA Championship last year, won the Northern Ireland Open on the Challenge Tour in July and finished fourth in the Road to Oman standings to claim a European Tour card for 2017. The New Zealander has hardly put a foot wrong from June onwards, finishing fourth in the Australian Open ten days ago.

Expect Fox, striking his ball with authority and more confident than ever in his ability, to improve on his Royal Pines results from the last two years (11-28).

Other selections
Stephen Gallacher 66-1
Jordan Zunic 150-1
Stephen Gallacher, who is healthy again after a hand problem, is thrilled with recent swing changes, and has jetted to Australia with a hunger for competition.

The Scot’s European Tour playing rights for this season are based on being in the top 40 of the career money-list and the 42-year-old knows this is not a time to be resting on his laurels.

Gallacher, with a Ryder Cup cap to his name and three European Tour titles, is a cut above most of the field in attendance at Royal Pines.

He has finished 12th in his last two events – the British Masters and Portugal Masters – and proved he could perform in Australia early in his career. Gallacher was fifth in the 2002 ANZ Championship in Sydney, fourth in the 2003 Heineken Classic in Melbourne and fifth in the same event the following year.

Gallacher could easily take a shine to Royal Pines and make a mockery of his price, while Jordan Zunic may also enter the equation at fancy odds. The Aussie youngster looks to be bursting with potential, has already won twice on the Australasian Tour, and was ninth last year on his Oz PGA debut.

Zunic tied for 18th place in a high-class Dunhill Links Championship last month and excuses can be made for his disappointing share of 44th in the Australian Open last time out.

Zunic made a long and unsuccessful trip to Spain to compete in the European Tour Q-School just before the Oz Open, and he may have hit a brick-wall of mental fatigue in his third-round 76 in Sydney. Expect this talent to come out fresh and firing on the Gold Coast.

Other notables
Jason Scrivener, who has finished in the top 30 in all three previous PGAs at Royal Pines, came close to selection.

Scrivener did just enough on the Race to Dubai to keep his European Tour playing rights, then tied for fourth in the Oz Open last time out.

French raider Romain Langasque, buoyed by a runner-up World Cup finish for his country in Melbourne on Sunday, is full of promise. This is a much tougher assignment, though, without back-up from Victor Dubuisson.

When to bet By 8pm tonight

Course overview RACV Royal Pines has hosted this tournament since 2013, the year Adam Scott landed his first Australian PGA triumph. Scores of 18 under par topped the leaderboard in 2013 and 2014, but Graham Marsh then completed his re-design and toughened the championship course. Tight fairways, water hazards and undulating greens make this a decent test, particularly when the wind is blowing, as was the case last year when nobody broke par over 72 holes. Being close to the beach, breeze is typically a factor. The first two holes are super-tough, and the 611-yard par-five third is not an easy birdie. The other three par-fives (the ninth, 12th and 15th) are much shorter. The 229-yard par-three 14th is a brute and the course closes with two difficult par-fours

Story of last year Strong winds meant level-par was enough to get into a play-off. Nathan Holman beat Dylan Frittelli and Harold Varner with a par at the first extra hole

Type of player suited to challenge This is no late-season picnic for the PGA competitors – long, straight hitting is required, as well as touch to handle fast, undulating greens. Comfort in a breeze is also needed