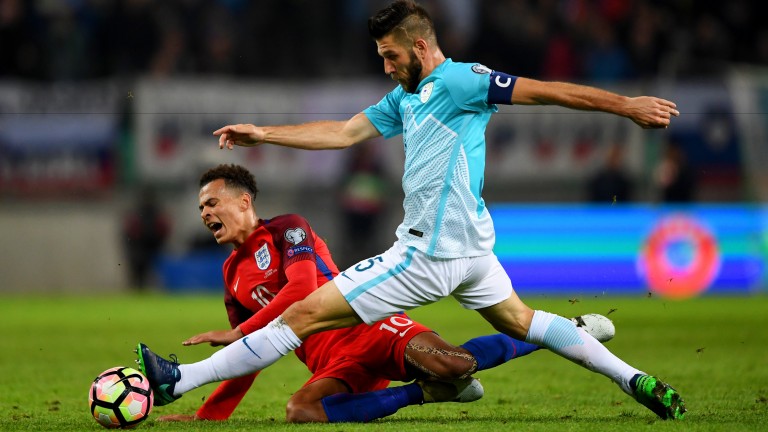 Dele Alli battles for the ball with Bostjan Cesar of Slovenia
Laurence Griffiths
1 of 1
By Mark Langdon 7:00PM, NOV 13 2016

Robert Lewandowski's absence from the Poland squad has disappointed the Wroclaw locals for this friendly with Slovenia and it may also leave favourite backers bitter.

Poland are odds-on to win but with no Lewandowski there may be no party.

The Bayern Munich superstar is not the only big-name absentee from the home squad either with Lukasz Piszczek and Kamil Glik rested from the side who won 3-0 in Romania on Friday, while Maciej Rybus and Arkadiusz Milik are injured. Glik is a major player in the heart of the Polish side as he showed during the run to the Euro 2016 quarter-finals but Lewandowski heading back to Munich is enough to swerve Poland to win this low-key friendly.

Poland have played four matches since the European Championship, beating Denmark, Armenia and Romania and drawing with Kazakhstan. They have scored ten goals in those games but Lewandowski notched seven of them.

Slovenia have a lamentable record in recent friendlies with one win in nine. They have scored twice in the process and their last 12 friendlies have all finished with under 2.5 goals.

However, Slovenia played Northern Ireland, Sweden and Turkey in their preparation for the European Championship so possibly lacked the focus of their opponents and it was the same in the World Cup year of 2014 against nations such as Algeria, Uruguay, Argentina and Colombia.

Slovenia have started World Cup qualifying well with wins over Slovakia and Malta and draws against England and Lithuania which suggests the visitors can avoid defeat in Poland.