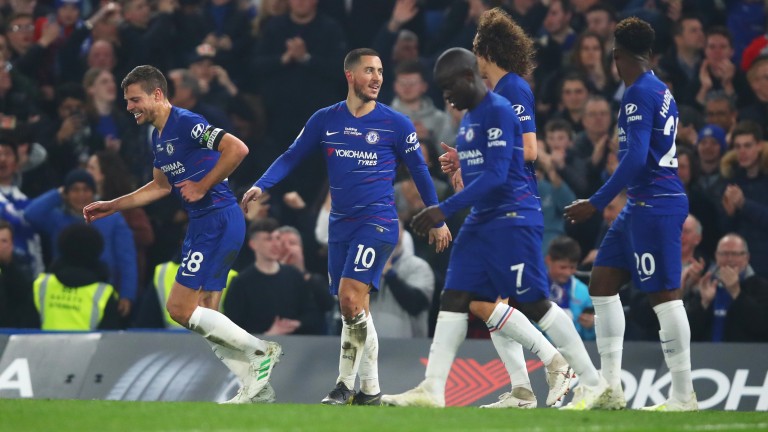 Chelsea coach Maurizio Sarri has allowed his fringe players to impress in the Europa League and they have rewarded his faith with a string of convincing displays, albeit against some second-rate opponents.

Their 8-0 aggregate demolition of Dynamo Kiev in the previous round was a reflection of the gap in class between the Blues and many of the other runners in the competition and Slavia Prague are arguably no better than the Blues’ last-16 opponents.

The Czech champions stunned Sevilla in the previous round but the La Liga side were in dreadful form at the time, enduring a run of just one win in ten league games going into that tie.

Even so, Slavia were still utterly dominated over the course of the two legs and even manager Jindrich Trpisovsky seemed stunned to have won the tie 5-4 despite managing just eight shots on target over the two legs while Sevilla had racked up a total of 30 shots. “It was a magical night. This may not happen again in my lifetime,” was his view.

Trpisovsky’s hopes of again getting lucky are undermined by the absence of key man Tomas Soucek, who is suspended after picking up a late yellow card in the second leg against Sevilla.

The Czech international is ostensibly a defensive midfielder, getting through his fair share of the grunt work for Slavia, but is also a creator and goalscorer for his team, netting an impressive nine league goals this term as well as a goal and an assist in Europe.

Without him, Slavia have big shoes to fill in the centre of the pitch and that is an area Chelsea can expect to dominate, even if Eden Hazard is again rested.

Callum Hudson-Odoi (four goals in eight Europa League appearances), Ruben Loftus-Cheek and Willian (both three goals) offer a range of attacking flair and creatively from midfield that will be hard to stop.

And with the tournament’s top scorer, nine-goal Olivier Giroud, rarely disappointing when called upon, Chelsea should have too much for a Slavia side who have conceded six goals in their last three European outings.

Chelsea
Ethan Ampadu misses out with a back injury while Danny Drinkwater and Gary Cahill are not included the squad. Chelsea otherwise are at full strength.

FIRST PUBLISHED 8:18PM, APR 10 2019
The Czech champions stunned Sevilla in the previous round but the La Liga side were in dreadful form