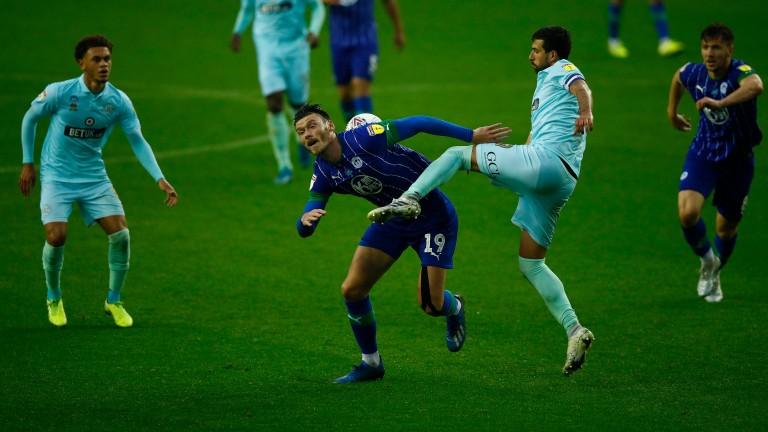 Wigan supporters were looking forward to a relaxing end to the Sky Bet Championship season after an excellent run of results helped the Latics surge clear of relegation danger.

However, off-field drama has seen the club enter administration and the threat of a 12-point deduction means they are effectively level with bottom club Luton, five points from safety.

Despite the horror show behind the scenes, Wigan are putting in consistently solid performances on the pitch and Wednesday's 1-0 home win over QPR sets them up nicely for a crunch clash with survival rivals Barnsley.

"We've still got plenty of fight in us," said manager Paul Cook after the QPR win, and that siege mentality can boost a side who have shown great quality and defensive grit since the turn of the year.

The Latics' only defeat in their last 11 Championship matches came against rampant Brentford, while they have beaten the top two in the division, Leeds and West Brom, in 2020.

Both of those victories were by a 1-0 margin, demonstrating the solid base Cook has established, and Barnsley should not expect any gifts from their visitors, who have kept eight clean sheets in their last nine games.

The Tykes resumed their campaign with seven points and three clean sheets from fixtures against QPR, Millwall and Blackburn but a 4-0 defeat at struggling Stoke and a 1-1 draw at Luton reduced their hopes of avoiding the drop.

Neil Warnock is no stranger to a relegation scrap and his Middlesbrough side can claim a vital victory over out-of-sorts Bristol City at the Riverside.

Warnock won his first game in charge, a 2-0 victory at Stoke, before narrow defeats to lowly Hull and out-of-form QPR.

Boro had more shots on goal than their opponents in both of those defeats, conceding an injury-time goal at Hull and a stunning Jordan Hugill strike against QPR.

They put those frustrations behind them with a solid 2-0 win at Millwall on Wednesday when Warnock was delighted with the way his side defended and by the workrate of strikers Britt Assombalonga and Ashley Fletcher.

Boro's desperation for the points is certainly factored into their price but Bristol City look ideal opponents at this stage of the season.

The Robins beat Hull 2-1 in midweek but picked up just two points from their previous nine games and are without a clean sheet in 12 matches.

Three goals in the last 12 minutes gave Preston a 3-1 win at Sheffield Wednesday last time out, ending a seven-game barren run for North End, but they may struggle to get anything at home to Nottingham Forest.

The Tricky Trees are on track for the playoffs despite losing 1-0 to Fulham and conceding an injury-time equaliser against Derby in their last two games.

Sabri Lamouchi's men are a decent side at this level, beating Leeds and Brentford and drawing away to West Brom since the turn of the year, and they can inflict Preston's fifth defeat in six home games.