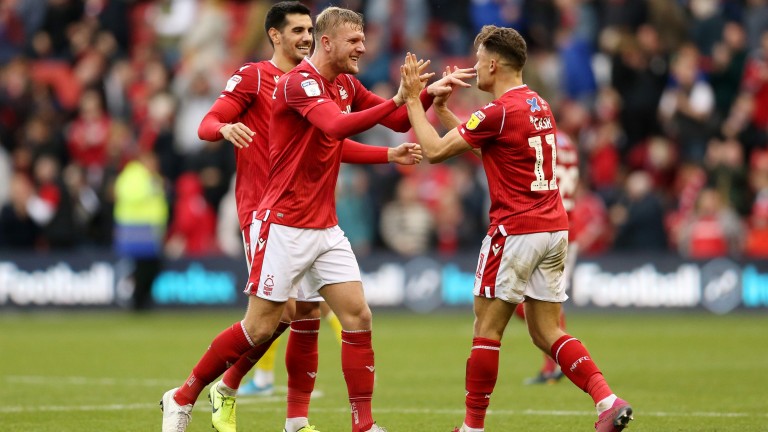 There could be more celebrations for Nottingham Forest this weekend
Paul Harding
1 of 1
By James Milton 3:14PM, JUN 19 2020

Matches kick off at 3pm Saturday

Sheffield Wednesday thumped Nottingham Forest 4-0 at the City Ground shortly before Christmas but not much has gone right for the Owls since then.

Forest resume their campaign in fifth place in the table, ten points off the automatic-promotion places but with a four-point cushion to the rest of the teams hopeful for a playoff spot.

They look a tempting price to avenge their home humbling at the hands of Wednesday, who have won only twice in 14 games since Christmas.

One of those victories was a 1-0 home win over relegation-threatened Charlton and the other, a smash-and-grab 2-0 success at leaders Leeds, was followed by a 5-0 home defeat to Blackburn.

The Owls' last two games before lockdown were a 3-1 home loss and another 5-0 reverse at Brentford and they will need a spectacular finish to the season if they are to make the top six.

Steven Fletcher is fit again for Wednesday but Josh Windass and Sam Winnall are likely to miss out. Forest, who should welcome back influential midfielder Samba Sow, can kick on in the race for a top-six finish.

Bristol City are two points clear of Blackburn in the congested battle for a playoff spot but Rovers may well leapfrog the Robins with a win at Ewood Park.

Lee Johnson's City have struggled against the teams around them this season, winning only two of their 14 games against the rest of the top ten.

That trend includes a 2-0 home defeat to Blackburn in December and Tony Mowbray has overseen consistent performances from his Rovers side despite the blow of losing top scorer Bradley Dack to a serious knee injury just before Christmas.

Blackburn have lost only three times at home this season – two of those defeats, bizarrely, came against relegation-threatened Charlton and Luton – and they should hit the ground running when the season resumes.

Paddy McNair's winner at Charlton last time out earned Middlesbrough some breathing space in the relegation scrap but Jonathan Woodgate's side remain in trouble.

That valuable victory at The Valley ended a ten-game winless run for Boro, who confirmed this week that Spanish defender Daniel Ayala will not play again this season.

Visitors Swansea are 11th, just three points off the playoff spots, and they appeal on the draw-no-bet market at the Riverside.

The Swans, who have lost just three of their 21 games against teams below them in the table, drew at home to West Brom and away at Blackburn and lost to an injury-time goal at Fulham in their last three matches, and a clash with Boro is a drop in class for the visitors.