Cameroon may be no match for determined Chile 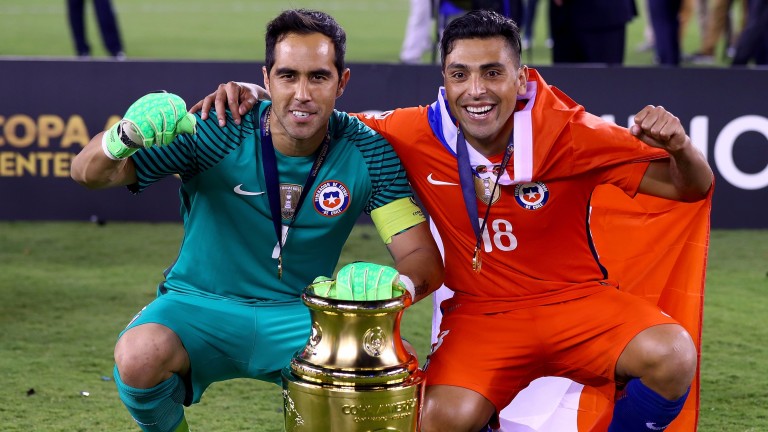 Chile have travelled to Russia with high hopes of winning the Confederations Cup and can get off to the perfect start by defeating Cameroon in their Group B opener in Moscow.

The last two years have been a glorious period for Chile, who have won back-to-back Copa Americas and dispensed with their reputation as serial underachievers.

Chile are lying in the fourth of four automatic qualification slots in South American World Cup qualifying and still have work to do in their four remaining games.

But their immediate focus is on getting things right in Russia and adding another major trophy to their collection.

Sanchez and Vidal – their leading scorers in World Cup qualifying with six goals each – will have major roles to play but Cameroon must also consider the threat of centre-forward Eduardo Vargas, who has netted 33 goals in 72 internationals.

However, the Romania result was heavily influenced by the 33rd-minute dismissal of Gary Medel when the Chileans were leading 2-1.

Cameroon's build-up has been unconvincing. They started the month with a solid enough 1-0 home win over Morocco in an Africa Cup of Nations qualifier, but lost 4-0 to Colombia in Madrid on Tuesday.

The performance against Colombia should be of huge concern because they face an equally difficult match against the Chileans.

There is a risk of underestimating the Indomitable Lions, who were given little chance at the Africa Cup of Nations earlier this year before going on to win the tournament.

Hugo Broos's side got past some decent teams in Gabon, defeating Senegal 5-4 on penalties in the quarter-finals before registering wins over Ghana (2-0) and Egypt (2-1) in the semi-final and final.

However, their warm-up loss to Colombia continued a trend of poor performances against South America teams.

Cameroon have lost all of their last four matches against Conmebol opposition and another defeat looks likely against a strong and skillful Chile side.

Team news
Cameroon
Cameroon have stuck with the bulk of the players who delivered the Africa Cup of Nations title in February. Premier League duo Allan Nyom and Joel Matip continue their exile after asking not to be considered for selection at the start of the year.

Chile
No fresh injuries have been reported since Chile's 3-2 loss to Romania on Tuesday.

Key stat
Chile have lost only one of their last 13 matches in major tournaments.