Six Nations: what the bookmakers say

Wales could pose the biggest threat to Ireland 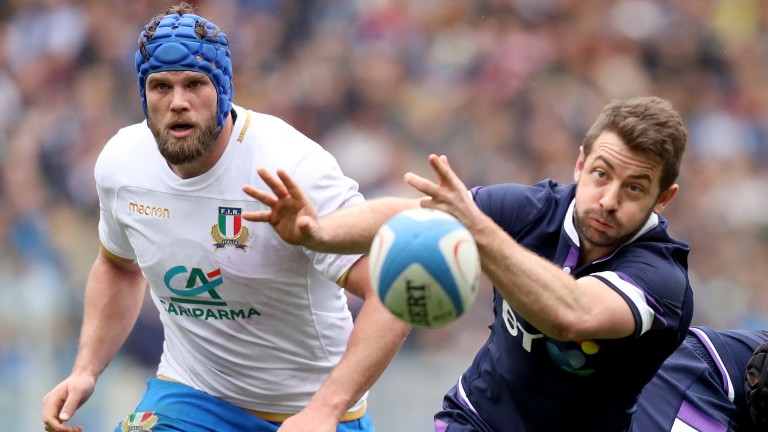 Many are predicting one of the tightest Six Nations battles for many years, so we asked the people in the know how they see it. Leading bookmakers’ rugby odds-compilers give their insight on who they think will win, who punters have been backing, and give their best bet in any tournament market.

I fancy Ireland to repeat last year’s Grand Slam heroics. Their squad is finely tuned and fresh in comparison to England whose players have had too much game time in the Premiership this season.

Wales could be the ones to give the favourites the most to think about and it could be a cracker in Cardiff in the final round of matches.

We’ve seen steady support for both Ireland and Wales given their form over the summer and the autumn internationals while England have been on the drift.

Sean Cronin to be top Ireland tryscorer is an each-way bet that catches the eye as he is having a fantastic season and scoring tries for fun. He is unlikely to start all of the games but his impact from the bench against tiring teams will provide him with ample scoring opportunities.

I fancy Wales to win it. If they can come through their opening match in France with a positive result then their tails will be up, and they welcome both England and Ireland to the Principality Stadium.

Ireland have been popular with most punters in the lead-up to the tournament after a very impressive autumn campaign.

My best bet is Ireland’s Jacob Stockdale to be the top tournament tryscorer.

Wales look the best bet to win the Six Nations this year in Warren Gatland’s final season in charge. They are coming off their best November performance and looking to extend an eight-game winning streak away to France in the opening match of the tournament.

This is the pivotal contest – if they can win it, they will carry their form through the campaign.

Punters seem to be in agreement as we have seen the most bets on Wales. They are a more appetising price than Ireland.

My best bet is Greig Laidlaw to be top tournament pointscorer. There are injury concerns at the head of the market around Owen Farrell and Johnny Sexton, Leigh Halfpenny is likely to take the kicking off Dan Biggar or Gareth Anscombe when he returns mid-tournament, and there’s a similar scenario with Morgan Parra and Maxime Machenaud in France.

Ireland are deservedly favourites given their recent form, but Wales have three winnable away games and should be right in contention. Wales v Ireland in the last round could well be the deciding game which would make Wales’s current outright price the value.

Wales have been backed pretty strongly in most of the outright markets, as have Scotland at a bigger price. England haven’t been as popular as they usually are with the punters up to now.

Wales outright is a fair bet but the Ireland-Wales dual forecast is the better bet option 5-2.

Ireland have been well backed from 6-5 into 8-11. But the worst results in our book are a Wales win and Wales to win the Grand Slam – we have seen as many bets on Wales as we have on Ireland.

The big news for Ireland is that Jonny Sexton has overcome his injuries in time for the opener.

They have the best squad and have world-class replacements in just about every department so it’s going to be difficult for any team to beat them. A Grand Slam wouldn’t be beyond them either.

If Scotland are to challenge then they will need Greig Laidlaw to be at his best. With their attacking style, I think there is plenty of opportunity for Laidlaw to rack up the points.

Ireland are my pick to win the 2019 Six Nations. Defending Grand Slam champions, a historic win against New Zealand in the autumn and with the four Irish provinces through to European quarter-finals, players are full of confidence heading into the opener against England.

Punters have been backing France to win outright despite their embarrassing loss at home to Fiji in the autumn internationals. A home win against an injury-ravaged Wales team could be the perfect start for them but I have my doubts.

My best bet for the tournament is Jacob Stockdale to be top tryscorer. He scored seven tries in last year’s Six Nations, six tries in six games in Europe for Ulster this season, and I see no reason why he can’t continue that dominant form.

I can’t see Ireland failing to win year. They had a great 2018 and their pack and depth of squad feels too strong for their opposition.

Punters have been backing Wales to win it and England for the Grand Slam, and we are happy to hold both those prices.

My best bet is an Ireland Grand Slam. They play England at home, and the only other match I can see troubling them is Wales away on the last weekend.

Ireland’s squad depth should come into play as the tournament goes on and they have a good chance of getting the job done.

Ireland are the obvious call for tournament winner. Irish rugby is incredibly strong at the minute, last year’s Grand Slam winners have beaten the All Blacks during a successful autumn campaign and Leinster, Munster and Ulster have all qualified for the Champions Cup quarter-finals.

They have strength in depth in every position and look a formidable outfit. That said, I wouldn’t particularly want to back them at odds-on when they may have to work hard to get any bonus points from difficult away trips to both Wales and Scotland. It could be tight this year.

As usual we have a pretty lop-sided book against Wales and Italy. Wales are the best-backed team every year and a Grand Slam would be costly for us.

My best bet is Scotland to win one match in the tournament at 5-1. They look sure to beat Italy but it’s not that hard to see them losing their home matches to Wales and Ireland and they are underdogs in Paris and at Twickenham.

Ireland go into the Six Nations as strong favourites and rightly so following a huge 2018 which included a win over New Zealand. They look the most settled side and are the likeliest winners.

Wales have injury concerns and England have two difficult away games in Ireland and Wales. Punters have been backing Wales since their unbeaten autumn campaign and Scotland have also been popular recently on the back of solid club form in Europe.

My best bet for the tournament would be Wales to finish in the bottom two. They have four games which are close to call and if they lose first up in France along with the injuries they are carrying they could drift in the later fixtures.

While Ireland will take all the beating, Wales probably present the most value at the prices. If they can get past France in Paris tomorrow night they should get in their stride and that could be enough to take them to a showdown with Ireland on the last game day.

Maybe it’s the Brexit blues but our punters have well and truly abandoned England – they’re almost as friendless as Eddie Jones at an away fixture! Similar to last season, Scotland are the ones for money. Edinburgh have been flying from a club perspective and that may be catching the eye of many.

In a World Cup year where some eyes may be on Japan, players with an injury doubt might not be risked when push comes to shove.

That makes Greig Laidlaw an interesting proposition in the top tournament pointscorer market. Johnny Sexton is prone to getting a few knocks, France as usual aren’t sure of who they might want kicking and Wales look set to split responsibilities too.

Like last year the tournament is Ireland’s to lose. After that success they went on to beat World Cup favourites New Zealand in the autumn which further boosts their credentials.

England beat Australia and South Africa but they still didn’t look anywhere near as impressive as Ireland and the victory over South Africa could quite easily have been a loss if the last-minute reckless challenge from Owen Farrell had been given as a penalty.

Wales have been very popular across the board in outright and Grand Slam betting, and in the Six Nations-World Cup double market.

My bet of the tournament would be Sean Maitland to be top tournament tryscorer. He has been in good scoring form for Saracens this year and Scotland will be facing Italy at Murrayfield in week one and they could score a bagful.

Ireland are rightly favourites, but I don’t mind laying odds-on. England have a lot of players returning from injury, but I still don’t think coach Eddie Jones knows his best back row or centre pairing, plus away games to Ireland and Wales make them opposable.

I’m looking to be with Wales. They’re on a decent winning streak and have their two hardest matches at home.

Scotland are the perennial dark horses, but they’re not quite there yet. France look great on paper, and I thought they had some improvement – then they lost to Fiji!

Punters are backing Ireland, I’ll be backing Wales, although my best bet is Scotland to score most tries.

The schedule is unkind to England with tough away days at their two strongest opponents, Ireland and Wales. For me Wales are the best value, particularly when factoring in their home advantage against Ireland in what could be the critical game in the final round. Some firms are offering 5-1 and that just looks too big to me.

Customers seem to want to be with Ireland in the outright and Grand Slam markets.

My best bets would be Wales to take the title and no Grand Slam winner.