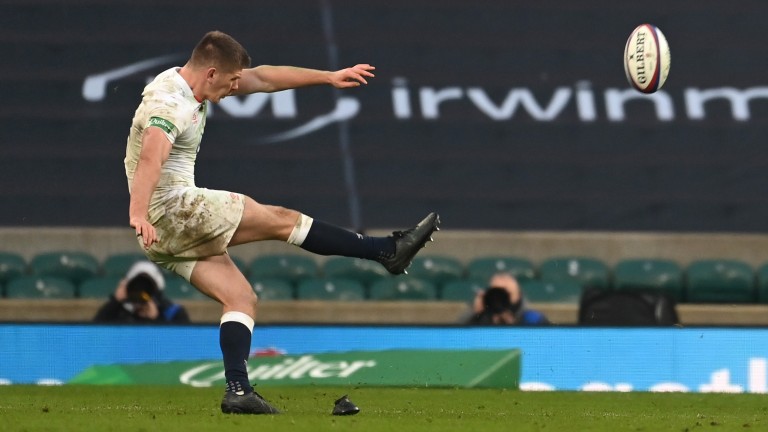 England's Owen Farrell is favourite to be the tournament's top tryscorer
Mike Hewitt
1 of 1
6:48PM, FEB 4 2021

The 2021 Six Nations tournament kicks off on Saturday, February 6, as England, Scotland, Wales, Ireland and France do battle for northern hemisphere rugby's crown.

We asked the bookmakers' rugby experts to tell us who they believe will win the Six Nations, where punters are putting their money and to give us their best bet for the tournament in any market.

Ireland should have too much firepower for a transitional Wales team and they can also see off France. Hopefully that will set up them nicely for the remainder of the tournament and possibly a Grand Slam decider at home against England.

There was solid support for France even before their Autumn Nations Cup campaign, where they looked impressive and ran England close in the final.

England are too short and got away with it last year while France are missing key players so I'll go for Ireland, who have a friendly schedule.

Punters like the look of France, who are an exciting team to watch with a crop of potential young superstars.

England are ranked number two in the world, a nose ahead of New Zealand no less, and despite injury concerns they have the huge bonus of playing the dangerous French at Twickenham in week four, when they should be firing.

France have been well backed. Coach Fabien Galthie was a great player in his day, and it's surely only a matter of time before he has a Six Nations success to toast - but maybe that will be next year.

Best bet: England to win the Triple Crown and Scotland to finish third

France have been very impressive under coach Fabien Galthie and have talent in abundance - they even managed to take England to extra-time in the Autumn Nations Cup with a severely weakened team. Although they have both Ireland and England away, they do have an easy fixture up against the Italians in round one.

France and Wales have both been backed, with Wales having the biggest liabilities at this point.

Best bet: Antoine Dupont to be Player of the Tournament

England will probably win it this year. Even though there will be no crowds, they have an easy start and can bore everyone to death!

We have been happy to lay them at short prices, and they are the only loser in our outright book.

Best bet: Ireland for the Triple Crown - they ought to be half the price they are.

There are reasons to think that Ireland, with England home in the last round, and France, who drew at Twickenham with their second team in the autumn, might emerge as winners but England rightfully start as favourites.

We've seen a bit of money for France - their resurgence in the last year has made them more appealing again.

England have France at home while Wales and Ireland looked to be struggling in the autumn so the favourites look the likeliest winners.

Punters are also expecting England to retain their crown after last year's win.

England have a kind fixture schedule and face weakened opposition so they have to be clear favourites.

Punters have been encouraged by last year's showing from France. They have been backed already and may keep shortening.

Best bet: Italy v Wales to be the lowest-scoring match.

Facing France at Twickenham is the key factor why England can win. Their physicality is still the best in the tournament, and the Saracens players should be fresh and raring to go.

Punters seems to have been impressed by the performance of France's 'third' team in the Autumn Nations Cup and are getting behind their first team to go well.

England have a few niggling doubts, but they are still solid favourites with a favourable schedule.

The tournament betting has attracted money for all teams but Wales to win the Grand Slam is a popular bet as usual.