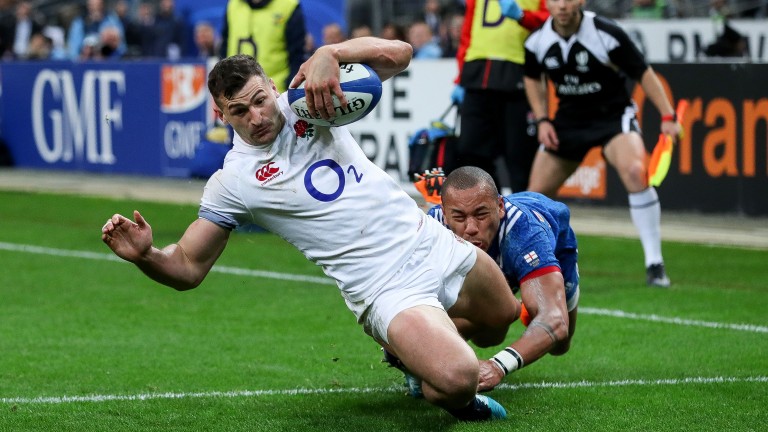 Jonny May scored four tries in the 2018 Six Nations including the opener against France
©INPHO/James Crombie
1 of 1
By Graham Woods UPDATED 4:15PM, JAN 31 2019

Order was restored in the tryscoring charts last year after years of low returns, multiple dead heats and scrum-halves, back-row forwards and the like popping up.

In 2018 a trio of back-three players stepped up to the podium with Ireland winger Jacob Stockdale on top with a healthy return of seven tries, the highest total in tournament history.

Every starting line-up has a few question marks over it and none more so than England’s backline.

But one player who looks assured of a start is Leicester winger Jonny May, whose pace and eye for the line overrides any concerns about defensive strength.

England face tough trips to Dublin and Cardiff, where they have struggled for tries in the past.

But they have three home games against opponents who between them have won just once at Twickenham in the Six Nations. Scotland and Italy have never tasted victory there while France have lost eight out of nine.

England have averaged five tries a game at home to Italy and put 60 points on the Scots the last time they visited, so there could be chances for May to plunder the scores to put him on the board.

The Wasps and former Exeter centre didn’t feature in the Six Nations last year but is a class act and started all four November internationals, scoring two tries.

He is one of the older heads in the Azzurri backline and may be called on to take on the mantle.

His career tally is modest but he has crossed at Murrayfield and Twickenham as well as grabbing a brace against Wales in his first Six Nations match, and two tries could be enough.

The Stade Francais centre is on the bench for France’s opening match against Wales but the midfield is still a work in progress and it would be no surprise if coach Jacques Brunel rings the changes.

Uncapped Romain Ntamack and the recalled Wesley Fofana are the starting centres to face Wales, two players at opposite points in their careers, and it’s obviously an untested pairing.

Vice-captain Mathieu Bastareaud has been dropped, and if that signals a move away from the old French crash-ball style of centre play, Fickou must be in with a chance of good game time and could also feature on the wing.

He has scored seven tries for France – five in the Six Nations – and again, in a team who score few tries, he may not need to hit the heights.

The market could be a two-horse race between Owen Farrell and Greig Laidlaw as the other nations are likely to mix up their frontline kickers. Farrell is 7-4 favourite while Laidlaw is a 10-1 shot.

Camille Lopez took the honours last year but although he starts at fly-half for France in their first match, goalkicking scrum-half Morgan Parra is also in the line-up.