Los Jaguares and Crusaders can put on a show

Seven tries in Christchurch meeting in 2016 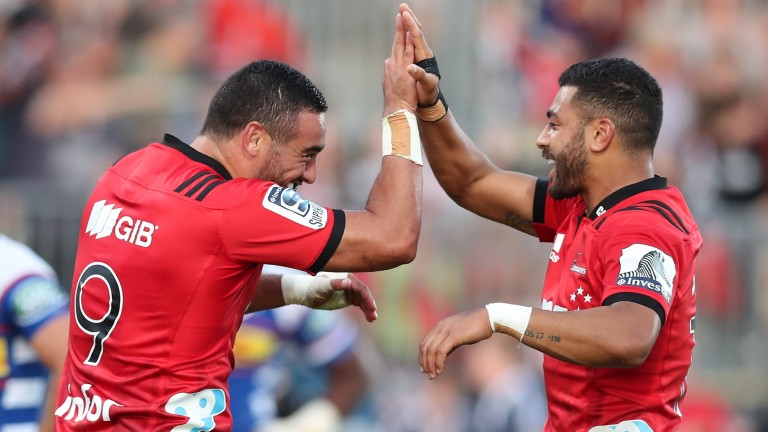 There has been a low-high-low-high total-tries pattern in the four matches in Buenos Aires this season. Take it on when Los Jaguares host the champion Crusaders by having a bet on eight or more touchdown.

The Crusaders have jetted in from Johannesburg after a 14-8 win over the Lions last week and another arm-wrestle will not suit them even though they have a bye next round.

Their hosts are rested after a week off following their 49-35 home success over the Lions, which contained 11 tries. There was also a total of ten tries when Los Jaguares inflicted the only Waratahs' defeat this season.

Inbetween those two wins, Los Jaguares butchered plenty of opportunities in defeat by the Reds and the Crusaders are a much more destructive outfit than the Queenslanders. While if Agustin Creevy's charges defend as woefully as they did in defeat to the Hurricanes in round three then it would be no surprise if the Crusaders had a field day and ran in the eight tries needed themselves.

The teams have only had one meeting before and a Christchurch win for the Crusaders contained seven tries.

Back the Stormers with a ten-point start in Johannesburg. They would have rewarded supporters at the same mark in four of the last five times the teams have met.

Back-to-back runners-up the Lions are not looking as sharp this season including at their Ellis Park stronghold and while the Cape Town outfit are yet to win on the road, they have shown ability to keep their side of the scoreboard ticking over and picked up a worthy losing bonus at the Waratahs.

Losing by ten up the road in Pretoria to the Bulls last week could well prove good preparation for the demands of playing at altitude.

The Lions have conceded 28 tries and need to pick themselves up from back-to-back defeats to Los Jaguares and Crusaders and have struggled to assert themselves against the Sharks and Sunwolves and sensationally been downed by the Blues too.

The Reds have won their last two meetings with the Brumbies, including 18-10 in round three, and will be happy with picking up the victory in Buenos Aires and a losing bonus in Cape Town from their two-stop tour.

However, both successes over the Brumbies were in Brisbane and they have conceded at least 40 points on their last three trips to Canberra.

The Brumbies are struggling for consistency this campaign with three defeats in five but their home loss last week was to the in-form Waratahs and their 24-17 ACT success over the Sharks does not so shabby after the Durban outfit blasted the Blues in Auckland and got chinned in injury-time by the Hurricanes in Napier on Friday.

Take the Brumbies to give up four points, a last-gasp 80m try gave the Reds their losing bonus at Newlands.

The Blues are a much better side defensively than they showed in their crazy 63-40 home loss to the Sharks and at least the Durban outfit began this week's battle with the Canes well enough to suggest that they are in an attacking groove.

However, it is hard to imagine that their heads are not still spinning and the Chiefs, who won 27-21 in Auckland in round three, are on a roll even if their long injury list shows no signs of easing.

The Chiefs built on a 61-10 cruise at the Sunwolves with a 27-21 Hamilton success over the Highlanders and before their Tokyo trip they beat the Bulls 41-28 at Waikato Stadium. Their 43-25 round-two loss at the Crusaders seems a long time ago.

A bet on the Chiefs to win by a margin of one to 12 points looks best. They have won 12 of the teams' last 13 meetings, ten by fewer than 13 points and while the Blues continue to have their defensive issues, they certainly remain a potent outfit with the ball in hand.

Recommendation
Chiefs to win by one to 12 points
1pt 21-10 Betfair, Coral, Ladbrokes

The Waratahs should be backed to give up 14 points to the Sunwolves at Prince Chichibu Memorial Stadium in Tokyo.

The Tahs have won three and drawn one of their five games this season and as the 2014 champions are in with a shout of the post-season for the first time in three campaigns, they should be keen to put on a clinical performance and win by at least three tries to pick up the try-bonus, rather than coast home.

The Sunwolves have shown up better with ball in hand this season but their defensive structures remain a mess. The Chiefs won 61-10 in Tokyo two weeks ago and Jamie Joseph's charges lost 32-25 and 37-17 at home to the Brumbies and Rebels in the first two rounds. They also conceded 13 tries in two defeats to the Sharks and Lions in South Africa.

The Waratahs beat the Brumbies 24-17 in Canberra last Saturday and tore the previously unbeaten Rebels apart in Sydney 51-27 after trailing 20-3. Even when they were hammered by Los Jaguares, they managed to score four tries.

The Sharks will be in good heart after stunning the Blues with a 63-40 win in Auckland on Saturday.

However, this is the fourth game of their antipodean tour and the Hurricanes are a step up in class so it would be no surprise if the Durban outfit fail to hit such heights in Napier.

The Canes, who are asked to give up 21 points, have reeled off four victories since starting the season with a sluggish loss to the Bulls.

They have comfortably ended the unbeaten runs of the champion Crusaders and Highlanders in Wellington and secured blowout successes over Los Jaguares in Buenos Aires and the Rebels in Melbourne. They also beat the Sharks 41-0 in a 2016 eliminator at the Westcap.

Back Ben Lam to score two or more tries 2-1. The Hurricanes wing claimed four tries in their 50-19 romp against the Rebels last Friday and the stunning display looks no fluke. Lam, who has been an integral part of the All Blacks Sevens set-up, bagged a brace against the Highlanders and also crossed against the Crusaders and Los Jaguares.

The Sharks have conceded 24 tries in six games and lost 46-14 at the Rebels a fortnight ago as well as 24-17 to the Brumbies in Canberra and 26-19 at the Lions in Johannesburg in round one.