Morocco can edge out Slovakia 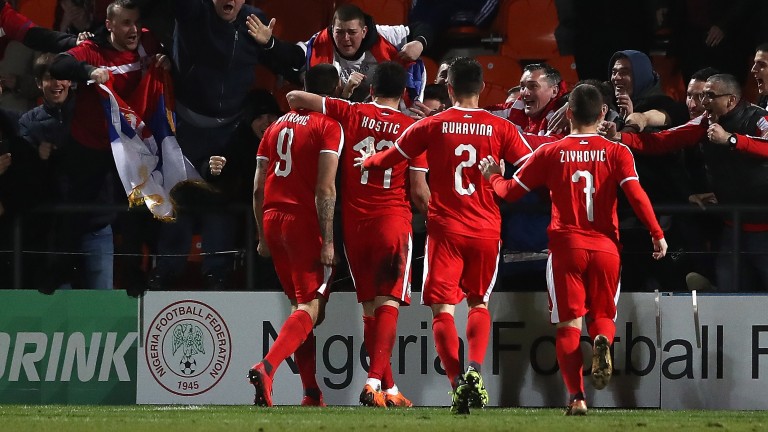 Serbia celebrate Aleksandar Mitrovic's second goal in the win over Nigeria
Matthew Lewis
1 of 1
By James Milton UPDATED 10:21AM, JUN 4 2018

Italy versus Holland would usually be the pick of the fixtures on a quiet day of international friendlies but neither of the European powerhouses qualified for the World Cup so it could be a bloodless contest in Turin.

Odds of 11-10 about an Italy win make little appeal given their customary lack of intensity in non-competitive games, although new coach Roberto Mancini will be looking to make a positive impact.

They have played four friendlies since their shock playoff defeat to Sweden, losing to Argentina (2-0) and France (3-1), drawing 1-1 with England thanks to a disputed late penalty, and edging past Saudi Arabia 2-1.

Punters are better off looking for pointers from the games involving teams who are heading to the finals in Russia.

Serbia, drawn alongside Brazil, Switzerland and Costa Rica in Group E, are evens for a friendly victory over Chile, another of the big hitters to miss out on qualification.

Chile have named an inexperienced squad for these friendlies and they lost 3-2 to Romania on Thursday, having to play with ten men for an hour.

Apart from 111-cap veteran Gary Medel, none of the selected Chilean players have reached the 20-cap mark and Serbia, who topped a trappy qualifying group containing Ireland, Wales and Austria, should continue their finals prep with a victory in Austria.

Morocco, who beat Serbia 2-1 in a March friendly, take on Slovakia in Geneva and the Atlas Lions should be in confident mood after 12 wins and three goalless draws in their last 15 internationals.

Slovakia held Holland to a 1-1 draw on Thursday, as Morocco were drawing 0-0 with Ukraine, but the north African side are solid in defence with seven clean sheets in their last ten outings and they can nick another morale-boosting win.