Seize the day and back Exeter for promotion glory 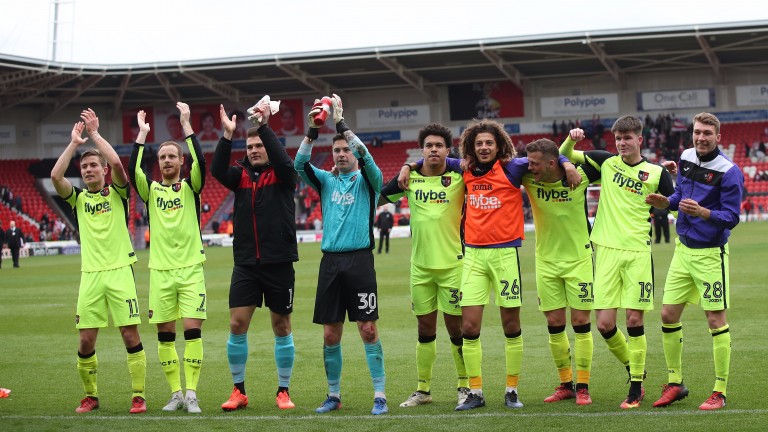 Exeter's players could be celebrating promotion via the playoffs
Lynne Cameron
1 of 1
By Mark Langdon 8:08PM, MAY 13 2017

Seizing the day can be all-important in the winner-takes-all playoffs and that could be to Exeter's benefit in Sky Bet League Two.

The Grecians, who look to have landed the plum semi-final draw against outsiders Carlisle, are likely to be the most adventurous of the four teams and their positive attitude could see them oust Blackpool or Luton if they make the Wembley final.

Only promoted trio Plymouth, Portsmouth and Doncaster won more than Exeter's 21 matches in the regular season and Paul Tisdale's team also racked up an impressive 75 goals. That was third-best behind Doncaster and champions Pompey.

Home advantage goes out of the window for the teams who reach Wembley and that is yet another tick in Exeter's box.

Tisdale's side have won 13 times on the road this season, considerably more than Luton (nine), Blackpool (nine) and Carlisle (eight) and that record includes victories at Donny and Portsmouth.

Exeter started the campaign dreadfully and didn't record their first home league success until December, but the Grecians won 16 of their last 30 matches.

David Wheeler, who scored 19 goals, did not start any of Exeter's opening 14 games and 14-goal Reuben Reid made his first start on September 24 which may help to explain that tardy opening.

Classy youngster Ollie Watkins was also comfortably into double figures for the season and Exeter have a number of different players who could do damage in the knockout ties.

Their semi-final opponents Carlisle's season was the opposite of Exeter's. They came out of the blocks quickly and were unbeaten in their first 21 matches in all competitions. The record of Keith Curle's side in 2017 is much less impressive: played 23, won six, drawn seven, lost ten.

Luton are favourites and understandably so. They accumulated the most points in the regular season (77) and finished with the best goal difference of plus 27. The Hatters also had the best shots-on-target ratio at 0.57, compared to Exeter (0.54), Blackpool (0.53) and Carlisle (0.51).

However, Luton drew 17 matches in the regular season and probably deserved an easier tie than Blackpool having finished fourth.

Top scorer Danny Hylton picks up almost as many cards as he does goals and two more yellows would see him miss out on the final if they get there which is also a concern for the market leaders.

Blackpool were unlucky to lose 1-0 at Kenilworth Road last month and that was one of only of five League Two defeats suffered by the Tangerines since Christmas.

If Blackpool get past Luton they are obviously a big threat but they are going to have to do it the hard way, first against the Hatters and then possibly against carefree Exeter in the final.