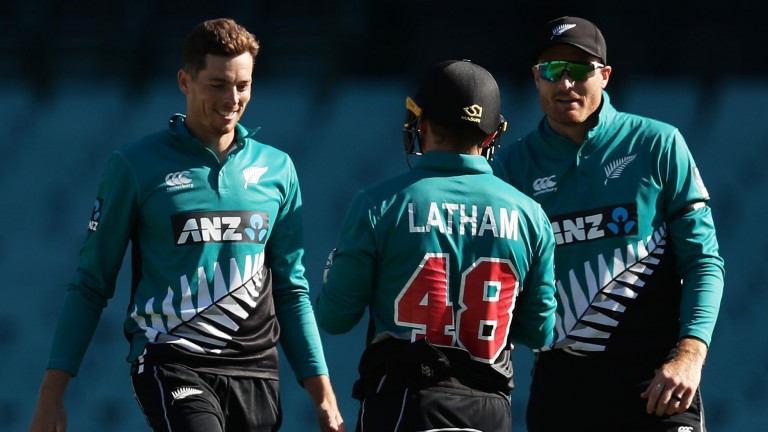 New Zealand gather to celebrate Mitchell Santner's dismissal of Steve Smith in game one at the SCG
Getty Images
1 of 1
By Liam Flin 12:46PM, MAR 14 2020

World Cup finalists New Zealand completed an ODI series whitewash of India recently but they have been unable to repeat the trick against Australia.

Aaron Finch’s men defeated the Black Caps by 71 runs in Sydney to take a 1-0 lead in their ODI series but it may not be as straightforward when the sides reconvene.

After Australia openers Finch and David Warner departed the crease on 60 and 67 respectively, Marnus Labuschagne was the only other batsman to reach 30 runs and they will have been disappointed to flop from 145-1 to 258 in their 50 overs.

Australia’s lower order has been a consistent concern and the Kiwi bowlers may smell blood.

Mitchell Santner failed to take a wicket in the recent series with India but the left-arm spinner recorded figures of 2-34 at the SCG, dislodging Finch and Steve Smith.

Mitchell Marsh reduced his pace and was rewarded with three wickets and on a surface which evidently favours spin bowlers, Santner could impress again.

Santner looks a solid bet at 9-2 to be the top wicket-taker for New Zealand as they look to level the series.