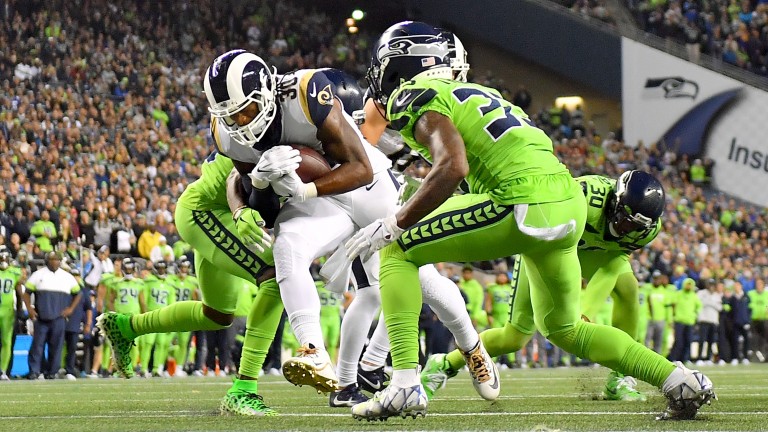 Seattle and the Rams had a memorable battle earlier in the season
Alika Jenner (Getty Images)
1 of 1
By Andrew Wilsher 4:36PM, DEC 7 2019

Free NFL picks, tips and predictions for Seattle Seahawks at Los Angeles Rams in Week 14 of the NFL.

The last meeting between these two teams saw Seattle come out on top 30-29 in a thriller as Rams kicker Greg Zuerlein missed a potentially game-winning field goal, but Los Angeles could get their revenge this time.

The significance of that missed kick can be seen by how each side have performed since. The Seahawks have won five of their six games and are currently the second seeds in the NFC, while the Rams have gone 4-3 and face a tall order to reach the playoffs.

It has been a head-scratching season for last year’s Super Bowl runners-up, who have blown hot and cold on offence, but showed signs of returning to form in their easy win over Arizona.

Quarterback Jared Goff threw for 424 passing yards and a touchdown, while running back Todd Gurley had 115 total yards and a score.

Since Seattle lost to Baltimore in October they have won all five games but each of them has been within one score, suggesting they could be there for the taking.

"They got dogs up front across the board. So, you really got to be mindful who you are going against."@BobbyEvans44 on facing the Seahawks defense, how the OL has progressed + more. pic.twitter.com/UL2EIsvKWh

The Seahawks have the fourth-worst passing defence in the league and if Goff can get into a rhythm, the stacked Rams offence could keep their post-season hopes alive.

Seattle have conceded 20 points or more in seven of their last eight games.