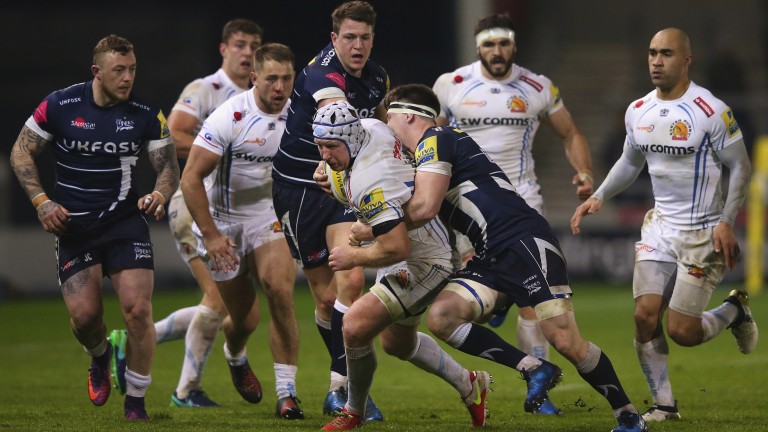 Clermont occupied second spot in the quarter-final seedings picture before this weekend's final round of Champions Cup pool matches, and they finally look a team to trust not to drop their guard with the end in sight.

A quarter-final place is already assured while Exeter arrive seeking an unlikely bonus-point victory to keep alive their hopes of qualifying.

Clermont have wobbled under pressure in the past but they look more focused this season after last year's pool-stage exit and they know the value of a top-two seeding which keeps them on course for a home semi-final. They have won five out of six knockout games at home but lost four of five on the road.

It's tempting to think that last week's scrappy 9-6 win over Bordeaux is a sign of a team closing ranks and reverting to a rigid no-risk approach. But Clermont had two players sin-binned in the first half while heavy rain hampered both teams' ambition.

It should be a more open affair in good conditions against visitors who will look to keep the ball moving. There are smart finishers on both teams but in a game likely to produce a few tries it's worth focusing on Clermont centre Wesley Fofana, who has pace and trickery plus an eye for a break, and Exeter flanker Thomas Waldrom, who is so often at the back of their favoured weapon, the line-out catch-and-drive.

This is effectively a dead rubber but Ulster can always be relied on to put in a fully committed performance in front of their loyal fans while Bordeaux have already won at Exeter this season and beat Clermont on the road in Europe last term.

Both teams have made a fair few changes without going as far as naming a second string, and Ulster retain a pretty fearsome looking backline.

The handicap looks a shade high at 15 points but it's not worth risking a wager at odds-on given questionable levels of motivation.

For an interest, take the 8-1 that Ulster's Kiwi winger Charles Piutau scores first. The former All Black showed his class with a try against Exeter last week and his power and pace should tell if the Bordeaux defence are less than fully committed.

This should be a cracking contest as it's make-or-break for three-time champions Toulon, who have stuttered in this campaign and need a big win at Allianz Park.

The French outfit were overturned at home by Sarries in the opening round but since then they have overhauled their coaching team, bringing in Mike Ford and Richard Cockerill who know Sarries inside out from their time in the Premiership.

Toulon stepped up the pace in the final five minutes against a gritty Sale side last week, scoring two late tries to seal a bonus-point win and they will need to show that same determination from the first whistle against the team who stole their European crown.

Sarries also left it late to leave Parc y Scarlets with a draw last week and with skipper Brad Barrit suspended in midfield plus the physical presence of the Vunipola brothers also missing, it is just worth chancing the French visitors with a start.

Sale gave their all at Toulon last week and director of rugby Steve Diamond wants to keep his players delivering the same level of commitment for their return to Anglo-Welsh Cup and Premiership action.

But they are still without a point at the foot of Pool Three and Scarlets, who came so close to beating English and European champions Saracens last week, have stuck with a strong side.

Scarlets have posted at least 20 points in every game in this European campaign, including four matches against Saracens and Toulon who have won the last four European titles between them. The Welsh side are three-point favourites and look worth backing to edge a victory.

Glasgow have never reached the quarter-finals in Europe and travel to Leicester, a team they thrashed in the opening round, knowing a win will mean they break that duck.

Leicester's performances this season haven't been good enough to keep club stalwart Richard Cockerill in his job, and yet the Tigers still lie fifth in the Premiership and are the only team to have beaten Munster in the last three months.

But that narrow success, courtesy of a late 50-yard penalty, is their only win in their last six and last week's 34-3 defeat at Racing 92 was a major low point.

Munster showed how to keep the dangerous Glasgow runners at bay as their powerful pack and defensive formation suffocated the Warriors at Scotstoun last week.

Although the Tigers have lost some of their forward edge but this could still turn into a similar arm-wrestle and it's worth chancing that it's left to a forward to claim the first try.

Last year's runners-up Racing 92 finally showed up to this season's Champions Cup party with a big home win over Leicester last week, but a trip to Thomond Park is another step up altogether.

Even though they made the final last year Racing won only one of their three away pool matches and their last four road trips in this competition have garnered returns of seven, 17, three and nine points.

A handicap in the 20s looks reasonable given there's no Dan Carter, Joe Rokocoko or Yannick Nyanga from last week and the best bet could be that Munster number eight CJ Stander scores a try as the hosts come powering out of the traps in search of a win that will land them a home quarter-final.