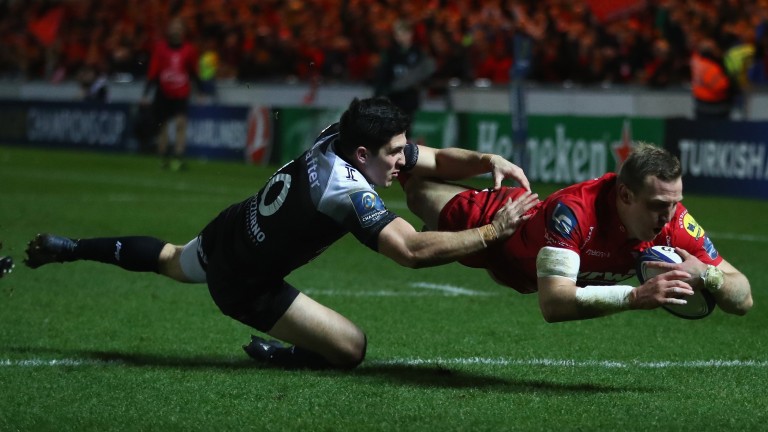 Scarlets centre Hadleigh Parkes scores against Toulon in the European Champions Cup
Michael Steele
1 of 1
By Graham Woods 8:00PM, MAY 17 2018

The quarter-finals of the Pro14 went according to the formbook, with the two higher-ranked teams, Scarlets and Munster, winning at home. Now the boot is on the other foot as they travel to the conference winners to battle for a place in next weekend’s final.

It starts with Scarlets, who came through what looked set to be a tough test against South African side Cheetahs with a surprising degree of comfort last weekend, running out 43-8 winners.

They head to Glasgow, who finished six points clear of all their rivals in both conferences and are unbeaten at their Scotstoun home in the Pro14 this season.

These sides were among the frontrunners in the reshaped Pro14 but their campaigns have followed markedly similar patterns.

Glasgow won their first ten games and arrived at the Six Nations with one defeat in 13, while the Scarlets were top of their conference with 11 wins in 13 matches.

Since then, both teams have identical records of three wins in their final eight regular-season outings, and the Scarlets could well arrive sharper and in better form having won their last two. The Warriors, in contrast, were off their game in their dead rubber against Edinburgh in the final round and have had a fortnight off since.

Where Scarlets also score is in their big-game experience and over the last two seasons they have shown their ability to step it up when they most need to.

Their run to the semi-finals of the European Champions Cup this term came thanks to nerveless victories over French powerhouses Toulon and La Rochelle, while last season they went all the way in the Pro12 with knockout victories away to Leinster and Munster.

Glasgow, by contrast, fell at the group stage in Europe in face of some top-calibre opposition. They last appeared at this stage of the Pro12 in 2016, when they lost to Connacht, while in their championship season the year before they needed a converted try five minutes from time to edge Ulster 16-14.

Glasgow have moved on since then, and key players such as Tommy Seymour and Jonny Gray were missing for the Edinburgh defeat but are back in a strong line-up. But Glasgow included many of their internationals, including Stuart Hogg and Finn Russell, in their side that travelled to Parc y Scarlets in April and were well beaten 26-8.

The Scottish outfit have looked the business at home all season but this could be as big a test as their European fixtures, in which they were found wanting. Scarlets, under the guidance of cool Kiwi coach Wayne Pivac, look the value to get the better of them.

The Top 14 playoffs kick off on Friday as fourth-placed Toulon host Lyon (8pm, live on Sky Sports Mix), while Saturday's second quarter-final is between Toulouse and Castres.

Table-topping Montpellier, 7-4 favourites to claim the Bouclier de Brennus, and second-placed Racing 9-2 are waiting to face this weekend's winners in the semi-finals.