Saturday's Super Rugby round six betting preview, free tips and where to watch 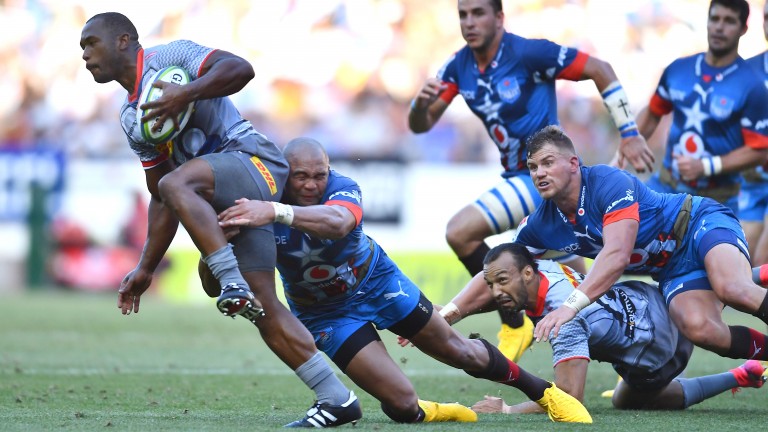 Stormers flyer Sergeal Petersen is tackled by Cornal Hendricks of the Bulls
Gallo Images
1 of 1
By Max Oram 5:59PM, MAR 6 2020

Two out-of-sorts sides do battle at Loftus Versfeld so a chance is taken on the Highlanders inflicting a fifth defeat out of five this season for their hosts the Bulls.

The Landers sneaked a win at the Brumbies in round two - a rare Canberra reverse for the ACT outfit - and have prevailed on three of their last four visits to Pretoria.

Kings Park will be buzzing when the Sharks run out at home again after winning three of the four matches on their Anzac tour but Jaguares are taken with a five-point handicap start.

The Sharks may be jet-lagged and Jaguares have acquitted themselves well in their two games in South Africa, pushing the then unbeaten Stormers hard before beating the Bulls in Pretoria.

The Argentinian outfit won both meetings with the Sharks last season and won five of eight regular-campaign road trips on their way to the final.

The Lions have won all five previous meetings with the Rebels but it is hard to see them shaking off the shocking start to their Anzac tour in Sydney last weekend when the Waratahs won 29-17. A defeat for the Joburg outfit in Melbourne by six or more points looks the bet.

The Tahs were trounced 51-14 by the Chiefs on Friday and the Rebels should be in good heart after their raid on the Highlanders in Dunedin last week.

Losing to the Sharks in Ballarat doesn't look shabby form and the Rebels won their previous Melbourne outing 24-10 against the Waratahs. The Lions lost 38-8 in round one at the Jaguares too.

The Hurricanes to win by a margin of one to 12 points looks the wager in Wellington.

The Canes have beaten the Blues in their last nine meetings and have recorded three excellent wins, including over Jaguares in Buenos Aires, since suffering a 27-0 shutout in Cape Town against the Stormers.

However, the Aucklanders arrive in the Kiwi capital buoyed by three road wins on the spin against the Waratahs in Newcastle and then at the Bulls and the Stormers in South Africa.

The Blues have stayed within 13 points in three of their last four visits to the Westcap Stadium or Palmerston North too.