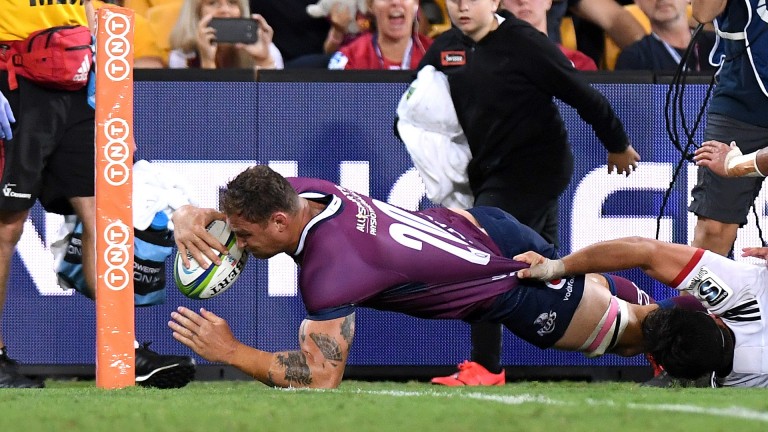 Scott Higginbotham stretches out to score a try for the Reds against the Crusaders
Getty Images
1 of 1
By Max Oram 12:20PM, APR 13 2019

Surely the Bulls can't suffer a third-straight Loftus Versfeld loss when they host the Reds as their overall form this season has been pretty good and the Queenslanders have not been the greatest of travellers in recent seasons.

However, the best-value bet in Pretoria still looks to be the Reds with a 12-point start. Brad Thorn's men have won three of their last four games and have stayed within 12 points of the Waratahs in Sydney and the Highlanders in Dunedin this campaign, as well as in a home defeat to the champion Crusaders.

The Bulls seem to have tightened up their game since losing 56-20 to the Chiefs in the South African capital three weeks ago, winning 19-16 in Durban and then losing 22-20 to the Jaguares.

With both the Sharks and Jaguares enduring inconsistent seasons, the best wagering policy in Durban looks to be to follow the main trend of the teams' meetings.

And that is that the Sharks have won four of the five clashes by less than 11 points including all three games in Durban.

The Sharks have lost their last two home outings narrowly but will surely have returned from Johannesburg buoyant after beating the Lions 42-5.

Jaguares should also be in good heart after stunning the Bulls in Pretoria last Saturday but earlier in the campaign they ran out of steam in Cape Town after pushing the Lions all the way in Johannesburg the previous weekend.

Recommendation
Sharks to win by a margin of one to 12 points
1pt 13-8  BoyleSports, Coral, Ladbrokes