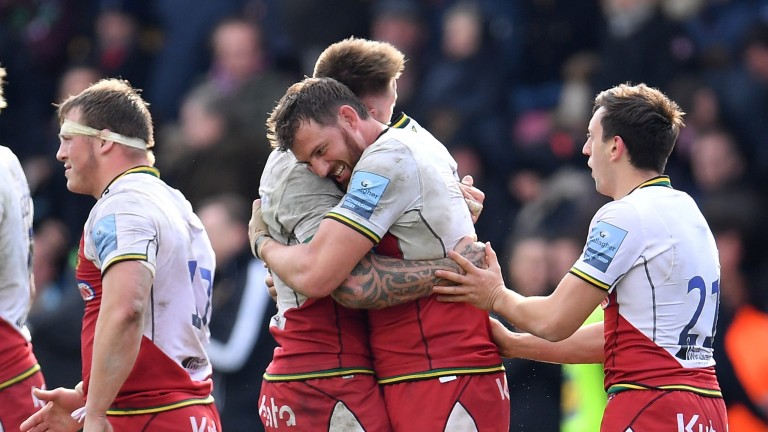 Northampton celebrate their victory at Harlequins in April which swung the top-four battle their way
Justin Setterfield
1 of 1
By Graham Woods 8:05PM, MAY 17 2019

On the final day of the Premiership regular season the TV cameras are focusing on the battle for the fourth and final playoff slot between Northampton and Harlequins.

Both face tricky away tests but Northampton hold the upper hand with a buffer of a single point and the knowledge that they will finish higher should the teams end up level on points thanks to a higher number of wins.

Exeter and Saracens are guaranteed the top two spots and home semi-finals, and while Sarries could still overhaul the Chiefs for top spot it looks a long shot.

Exeter coach Rob Baxter has named his strongest team for the visit of Northampton and is calling for a strong performance to launch their playoff campaign.

Since earning their home semi-final, the Chiefs have wavered, Baxter has taken to rotating his squad, and their last three outings have resulted in two defeats and a two-point victory over Harlequins.

After finishing top of the table last year Exeter had no answer to the intensity which champions Saracens produced in their run to the final, and Baxter wants to see his team do the same.

Northampton have won their last three matches, starting with a last-gasp success at Quins, to move into pole position and they beat Exeter in their home encounter in December.

It would be no surprise to see the Saints aiming for a fast start to try to capitalise on any lack of cohesion in their opponents' ranks, and they have been in fine scoring form, picking up try bonus points in four of their last six matches.

But the Exeter machine should hit top gear as the action unfolds and the hosts can take the spoils.

Harlequins look to have an easier task as they go in search of victory at inconsistent Wasps, who have won just two of their last eight games.

But Quins haven't been much better. Fourth place had looked to be theirs for the taking but a run of five straight defeats saw them overtaken and although they bounced back with a win over Leicester last week, they have won just three times in ten away games.

Even if Wasps win they will need other results to go their way to earn a Champions Cup spot, but that doesn't mean they will lack incentive.

The final home match of the season often brings out the best in teams and with fly-half Lima Sopoaga back in the side plus big names Joe Simpson, Nathan Hughes, Willie Le Roux and Gaby Lovobalavu bidding farewell to the club, Wasps can dash their rivals' hopes.

Of the non-televised fare, Saracens' trip to Worcester jumped out as a betting proposition following their success in the European Champions Cup final last weekend. Plenty of big guns are rested and academy fly-half Manu Vunipola - cousin of Mako and Billy - makes his first Premiership start.

Having been eight-point underdogs in the week Worcester are now narrow favourites, but such is the depth of the Sarries squad that even a much-changed side represents a formidable challenge.