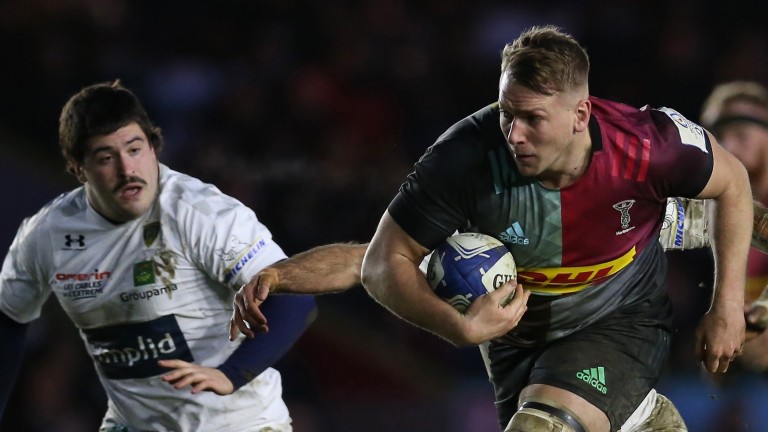 Alex Dombrandt of Harlequins breaks away with the ball against Clermont
Steve Bardens
1 of 1
By Max Oram 7:55PM, FEB 28 2020

Premiership leaders Exeter are worth a wager to exact revenge for Harlequins’ recent Premiership Cup semi-final raid on Sandy Park with a narrow success at the Stoop.

The Chiefs ground out a 26-15 win at Gloucester a fortnight ago and hammered Northampton 57-7 on Sunday whereas Quins, who have lost at home to London Irish and at Bath since, have won only one of their last five league games.

Exeter are unbeaten in their last seven away games in all competitions and have lost just one of their last 11 Premiership meetings with Quins, a 28-26 reverse in London two seasons ago.

Rob Baxter's Devonians scored four tries on that occasion and have crossed the whitewash 16 times on their last three regular-campaign trips to Quins.

Harlequins have been turned over twice at the Stoop in the Premiership this term - by Worcester and the Exiles.

The Chiefs demonstrated against the Saints why they top the table and are the leading tryscorers and pointscorers. They mixed up pack power and a heavyweight defence with electric handling and running and precision kicking.

However, with Alex Dombrandt, Chris Robshaw and James Chisholm in the Quins' back row, it is unlikely to be all one-way traffic at the breakdown and around the fringes, while Marcus Smith rarely needs a second invitation to set alight the pacy home backline.

With rain and gales forecast for both Pro14 matches, the best betting strategy looks to be two forward anytime tryscorer bets.

Munster back-rower Arno Botha could barge over for a seventh try of the campaign when Scarlets visit Thomond Park while Cheetahs hooker Joseph Dweba is value to dot down for an eighth time off the replacements bench for their trip to the Dragons.