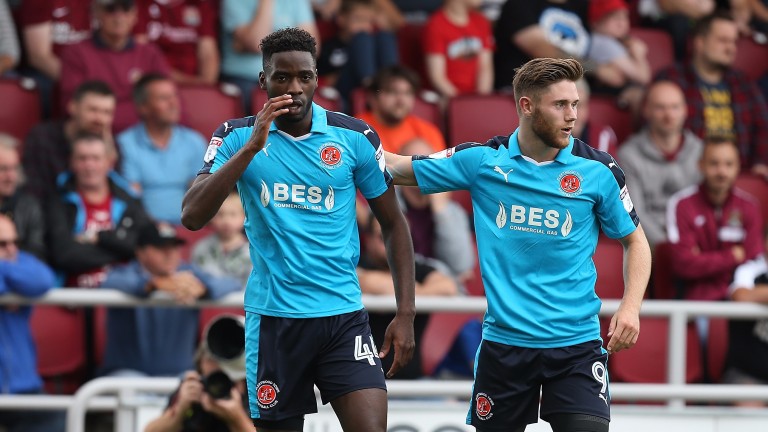 MK Dons v Fleetwood
There should be no doubts that Milton Keynes have a tremendous stadium which is one of the best in Sky Bet League One but it usually inspires opponents and Fleetwood can reproduce last season's win at the Dons.

Only Gillingham and Plymouth have won fewer home matches than MK Dons' tally of two in League One this term and that woeful run has been going on much longer than just this campaign.

Last season's tally of seven home victories was the joint-fewest in the division too and Fleetwood appear to be just the kind of streetwise side that MK Dons struggle to overcome at home.

Fleetwood, playoff semi-finalists last season, have lost one of their last nine matches and that was 1-0 away to leaders Shrewsbury. Since then the Cod Army have scored eight times in four matches and they are a threat even without the injured Conor McAlney.

Devante Cole leads the way with eight league goals for Uwe Rosler's men and should be a big threat to the wobbly home defence.

Coventry v Mansfield
Some bookmakers rate Coventry at evens to beat Mansfield but it may not be as simple as that and the 1,500 or so visiting supporters could have something to celebrate at the full-time whistle.

Coventry deserve respect - they lead the shots and shots-on-target ratio rankings in League Two this season - but had failed to score in four straight league matches until a stunning 3-0 success at Luton.

That result was clearly a major step in the right direction, although two of the goals came in injury-time and Mansfield could make life difficult.

Mansfield are miserably failing to justify the pre-season hype which made them ante-post favourites but they tend to turn up for big occasions with derby wins over Lincoln and Notts County and draws against high-flying Luton, Exeter and Wycombe.

The penalty given against Northern Ireland on Thursday was incredibly harsh and may be the difference between them not going to the World Cup and Switzerland being in Russia but what is the alternative?

VAR I hear you shout, but this is what Germany and Juventus midfielder Sami Khedira said this week of Video Assistant Referees.

"Its application in the Bundesliga has been disastrous. Football is about emotions and mistakes are part of the sport. If we can avoid errors, that's better, but now players don’t know whether to celebrate a goal or not, as they’re waiting for the verdict.

"This way, you lose a lot of the passion. If we regulate a clear use of VAR, then that’s ok, but when you stop a game for three minutes with the players standing there doing nothing, that is the death of football."

Bundesliga fans have been protesting over VAR usage and this week the man at the head of their testing system, Hellmut Krug, was sacked.

I see only two solutions. One, we accept referees will make mistakes or if we must have VAR, give each manager one challenge which they lose if they incorrectly call for the video (with a touchline ban for frivolous appeals) or retain if successful.

The current version of VAR is just as bad as the award of the Swiss penalty.