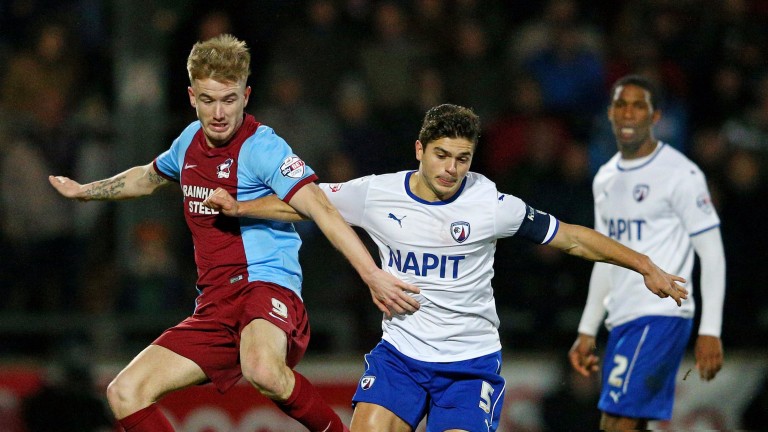 Scunthorpe v Bristol Rovers
Bristol Rovers were the star turns during the last international break - winning 6-0 at Northampton - but they followed up with six defeats in their next seven games and could be on the wrong end of the result when facing promotion-chasing Scunthorpe at Glanford Park.

Successive league wins have lifted Scunny from 12th to fifth in Sky Bet League One.

The Iron appear to got have got over the disappointment of last season's playoff semi-final exit and are meeting Bristol Rovers at just the right time.

Rovers manager Darrell Clarke has watched his team concede 11 goals in their last three matches and is running out of patience with his defenders.

He is targeting new recruits in January but must rely on a small squad for the time being and is handicapped by the absence of some key players, with reliable defender James Clarke and top scorer Billy Bodin on the injured list and centre-back Tom Lockyer joining up with the Wales squad.

Scunthorpe also have a hole to fill at the back with Rory McArdle away with Northern Ireland but Charlie Goode, who made 20 league appearances last season, is waiting in the wings.

Scunny have looked solid during their recent five-match unbeaten run and are tasty odds-against favourites to extend it with another win.

Oxford v Northampton
The tide has turned for Northampton in recent weeks and they can extend a five-match unbeaten run by taking at least a point at Oxford.

Jimmy Floyd Hasselbaink inherited an injury-hit squad who were low on confidence but has got them organised and is starting to benefit from the return of key players.

Midfielder Matt Crooks and right back Brendan Moloney are back in contention after returning to full training and attacking midfielder John Joe O'Toole is expected to shake off a minor ankle injury.

Hasselbaink has warned his players against being over-confident but they have a great chance of piling on the misery for an Oxford side going through a sticky patch.

Oxford have lost their last three matches and were completely outplayed when going down 2-0 away to Sky Bet League Two strugglers Port Vale in the FA Cup.

Manager Pep Clotet had made just one change for the match at Vale Park but he used some fringe players in midweek and watched them go down 4-3 at home to MK Dons in the EFL Trophy.

Clotet is fast running out of reliable options and his team's decline looks set to continue.

Carlisle v Yeovil
Carlisle have had their problems in home games this season - winning one of eight Sky Bet League Two matches at Brunton Park - but look solid odds-on shots to topple Yeovil.

Sorting out their home results will be key if Carlisle are to reach the playoffs for a second successive season and they had some encouragement last Saturday, winning 3-2 against Oldham in the FA Cup.

The Cumbrians are unbeaten in four league games and have the benefit of taking on a Yeovil side weakened by the absence of suspended strikers Francois Zoko and Olufela Olomola.

Zoko (five league goals) and Olomola (seven) have contributed half of Yeovil's 24-goal tally and are likely to be sorely missed.