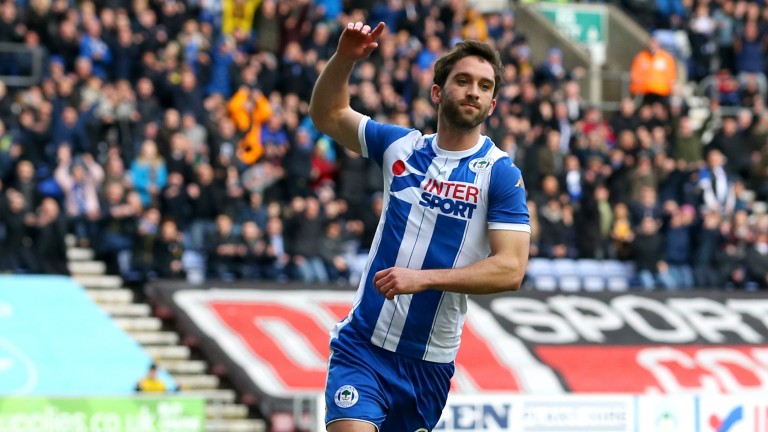 Wigan v Rotherham
Wigan have proven themselves to be the class act in Sky Bet League One this season and they can take a decisive step towards being crowned champions with a home victory over Rotherham.

The Latics are level on points at the top with Blackburn having played one match fewer. That does not show their true supremacy, but their goal difference of plus 54 compared to Rovers' plus 39 does.

Tuesday's 4-1 win at Rochdale was a remarkable performance for two reasons - the hosts are much better than the league table suggests and the shots-on-target count was 8-1 in favour of Paul Cook's rampant visitors.

The classy Nick Powell was injured during that contest but he was replaced by James Vaughan to highlight their strength in depth and Will Grigg continues to fill his boots at this level.

Wigan were arguably distracted by their rub to the FA Cup quarter-finals, but they have since knuckled down to score nine goals in their last couple of matches. In total they have won six of their last seven in the third tier.

Rotherham, in fourth, are having a fine season themselves and will be hoping to return to the Championship via the playoffs. However, they have lost three of their last four away matches and could struggle to contain Grigg.

Plymouth v Portsmouth
Pompey fans may not be as pumped up as Plymouth's supporters for a game that has become more known as the dockyard derby but there is extra spice between the clubs following some scraps in League Two before both came up last season.

This game, as much as any other this weekend, highlights how important shot data is in modern football pricing because in terms of the league table the odds make little sense.

Only goal difference separated the pair last season and Plymouth are one point ahead of Pompey this term having played one match fewer. The table suggests there is nothing between them over nearly two full campaigns, while the season before (2015-16) Plymouth also finished three points ahead of Pompey.

However, the clubs go about achieving their points in very different ways and Plymouth's overreliance on Graham Carey's set-pieces, is seen as unsustainable even though it has been sustained for two years!

Maybe Plymouth are punching above their weight, but two defeats in 19 is worthy of enormous respect. Those losses came against Wigan and Charlton, who had a new manager bounce after appointing Lee Bowyer.

Plymouth have won 11 of their last 12 at Home Park, including each of the last six, and Argyle are worth backing as underdogs.

Oxford v Southend
We have reached that stage of the season when teams enter the "nothing to play for" category and end up being artificially big prices against teams who are desperate for the points.

There is nothing in recent months to suggest that Oxford, now under Karl Robinson, should be favourites to beat Southend, who despite being stuck in mid-table put in a valiant effort in defeat when going down 1-0 at Blackburn last week.

If Southend maintain those standards they should push Oxford closer to relegation following a run of two victories in their last 16 matches.

Southend have lost only three of their last 13 matches and have power and former top-flight quality in both boxes thanks to Michael Turner and Simon Cox. If the season started now under Chris Powell the Essex side would possibly have their eyes on the top six.

Banker
Wigan 8-11
The free-scoring Latics have the firepower to hurt a Rotherham side who have been conceding goals at an alarming rate in recent weeks despite being fourth in the table.

Blowout
Blackpool Evs
It has been a great couple of matches for Blackpool, beating Bradford and Northampton by a combined score of 8-0, but this derby could be tricky as Fleetwood have lost only one of their last nine.

Gigi Buffon is an iconic figure in world football, one of the best players of his generation, and usually a man of distinction and the highest moral compass with sportsmanship running through his veins.

However, his actions at the Bernabeu on Wednesday were shameful and so were his stinging comments afterwards. There are no excuses. Yes he was upset and it may well have been his last Champions League match but so what?

If anything his anger should have been directed towards the Juve defenders for leaving a huge gap - and it was a clear foul by Medhi Benatia on Lucas Vazquez.

Andrea Pirlo, defending his former teammate, said: "With just ten seconds left on the clock, if you are wise, you don't give it and you let the two teams battle it out for victory in extra time."

Since when was that a rule? You can't avoid giving a penalty because it was painful to Juve following their gallant comeback from 3-0 down. A penalty is a penalty if there a foul inside the box.

Let's hope Buffon sees the error of his ways because he let himself down in Madrid.